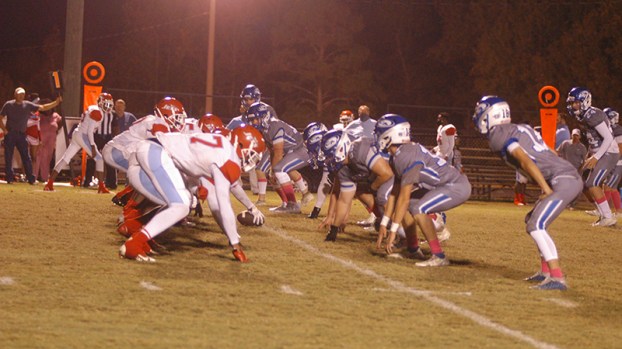 LaFAYETTE — Chambers Academy’s John White returned the opening kickoff for a score to get the Rebels off to a fast start Friday night in the team’s final regular season home game at Torbert Field. Chambers poured it on from there, leading 24-6 at the end of the first quarter and 44-6 at the end of three. The Rebels hit the half century mark in scoring, closing out with a 50-6 win over the Banks Academy Jets from Birmingham.

With the win and a Springwood loss, Chambers clinches the AISA Class 2A Region 1 title and two home playoff games. They have done what they had to do to have a favorable run to another state championship game in Troy. The Rebels close out the regular season next Friday night on the road at Crenshaw Christian.

It looks like the Rebels will host Autauga Academy in a first-round playoff game in two weeks.

”John White had a god game for us tonight,” said Coach Jason Allen. “He got us off to a good start with that kickoff return, and had a good night catching the ball with four receptions for 102 yards.”

Payton Allen completed 12 of 17 passes for 260 yards and 3 TD passes. Jeremy “Spud” Conway had four catches for 22 yards and a touchdown, and Josh Holliday had two receptions for 35 yards and a score.

Star receiver T.Y. Trammell sat out the game nursing a pulled muscle but should return next week.

The game was played in memory of Jaquavian Banks, older brother of Chambers linebacker Jarquez Banks, who tragically lost his life earlier this week.

“Qua” was close to the program and will be missed by many. Younger brother Jarquez did not dress out for the game.

On the opening kickoff, White fielded a low, bounding kick on his 15 and headed right behind a well-formed wall of blockers and raced into a big opening down the right sideline to give Chambers the lead for good. On the conversion, Allen found Conway opened in the right flat just past the pylon to make it 8-0 with 11:49 left in the first quarter.

Banks showed some offensive punch on their first drive. Running back Cameron Coleman raced through a big hole in the Rebel line and appeared to be off on a long TD run. Hayden Hurst caught up with him inside the 10 and brought him down on the five. That would be the lone highlight play of the game for the visitors. From short distance away, the Jets would get the ball in the end zone with a one-yard sneak from quarterback Jason Parker. Banks had a chance to tie the game at the 8:43 mark of the quarter but Parker’s pass attempt fell incomplete.

From then on, the game would be all Rebels.

With disaster taking place on their first kickoff, Banks opted for an onside kick. It didn’t work, but at least Chambers didn’t run it back for a touchdown.

Zack Bylsma recovered on the Chambers 48 to give the Rebels great field position.

On the first play of the series, Allen hit White on a short pass, and the receiver broke it down to inside the Banks 30. Two plays later, Allen hit Holliday breaking across the middle near the 15, and the fleet receiver zipped into the end zone for the second Chambers TD of the game. Benbrook found the end zone off the right side of the line to add two more points. With 7:14 left in the quarter, the Chambers lead had grown to 16-6.

Banks drive the ball past midfield on their next possession before having to give it up on a punt. They had the Rebels in a deep hole inside their five, but they drove it 98 yards for their third TD of the game. Allen had what appeared to be a 93-yard TD run called back on a penalty, but it didn’t keep the offense from scoring another way. Inside the 30, Allen passed to senior wideout Jake Higgins, who was open in the back of the end zone. That made it 22-6 with 2:03 left in the half. A pass from Allen to Conway on the conversion made it 24-6.

Chambers would get one more score before halftime on a one-yard run by Benbrook. Jeremy Pollard’s PAT kick made it 31-6 with 4:47 left in the second period.

A big play on defense gave Chambers a short field to score a TD in the third quarter. An interception by Cade Tarver gave the ball to the Rebels at the Banks 34. The short-field drive and Pollard’s PAT made it 38-7.

Late in the period, a long pass from Allen to White made it 44-6 with 33.1 seconds left in the third period.

The Chambers reserves closed out in the scoring in the final minutes with Braxton Yerta scoring from nine yards out with 50.6 left in the game. The PAT was blocked leaving the final 50-6.