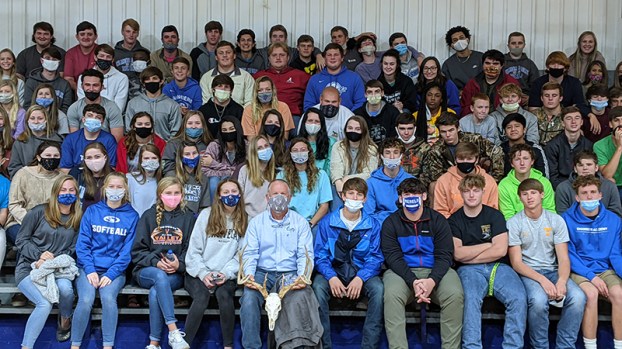 On the third Wednesday of the month, Chambers Academy brings in a speaker to talk to its students, especially those in high school, about ministry and faith.

This Wednesday was Matt Kelly from Equip Ministries, which is run out of Livingston.

Kelly spoke to a group of roughly 150 Chambers Academy students about the dangers of addiction.

“There’s’ a vast majority of people out there that have made bad decisions in their lives, and they have been stricken with a curse of an identity crisis,” Kelley said. “Most of these people who have made bad choices, they have allowed drugs and alcohol to take over their lives. They basically go for the rest of their lives in recovery. The secular world teaches them that once they’re an addict, they’re always an addict. Once you’re an alcoholic, they’re always an alcoholic. That is such a negative identity that brings about a guilt and a shame complex that these people have to live with for the rest of their lives.”

Kelly is speaking from experience as he was an addict for more than 20 years. He started drinking when he was 15 years old.

“I’m a preacher’s kid,” Kelly said. “I’m supposed to know better, but my choices took me down a different path.”

Kelly used a deer skull as an example to get his point across.

Kelly was fishing one December when he saw something floating in the water. When he got closer to the object in the water, he could tell it was a deer that had gotten tangled up and died in the water. Kelly said the deer was about 5 years old and had probably drowned in the water since there wasn’t a gun-shot wound.

“In the state of Alabama, not many deer live to be this big or to live that old,” Kelly said. “He was in the prime of his life. He was probably one of the wisest animals that lives in those woods. How in the world did could he have made a mistake that cost him his life?”

That deer knew he had a specific path through the water to get to the other side, but the rain had caused the water to rise and push him off his path. Kelly surmised that the deer hit his horns on a Cyprus tree and got them stuck. The deer probably fought the water and the tree until he drowned.

“That’s when God began to open my eyes and my heart to a very real story,” Kelly said. “This story is about a young man who did the exact same thing. Right now, you’re just about to step into the River of Life. Right now, you’re under the protection of a wonderful school full of teachers and coaches who have been helpfully guiding you. They’ve been there to help you, but you’re about to step out into the River of Life.

Kelly made the point that in the “Current (or River) of Life” that plans can change. The future that was planned out so carefully can change in a matter of moments.

“You have to make decisions that you know will bring you out in a better place,” Kelly said. “You have to be smarter.”