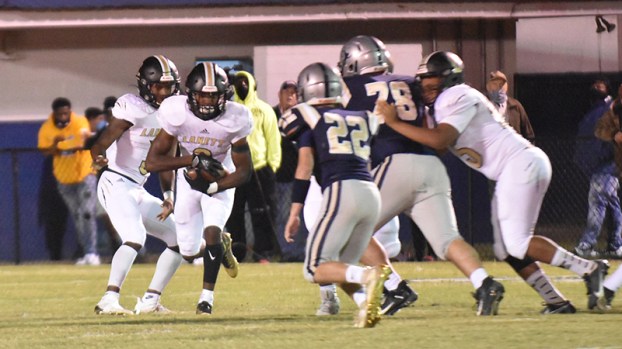 In 2019 the Lanett Panthers had a top of the line duo in Kristian Story and BJ Smith to lead the rushing attack.

Story was the team’s leading rusher, but Smith was the second option and did a lot in the passing game, specifically his ability to block incoming rushers.

When Smith graduated, it left a big hole in the Panthers starting lineup, one that head coach Clifford Story wanted to fill by committee at the start of the season.

As the season progressed, junior D’Quez Madden separated himself from the group.

“I’ve known all along that he has the tools and the skillset to do what he’s been able to do,” Story said. “We have just got him focused, locked in and committed to the team.”

Madden was a factor in 2019, running for 209 yards on just 53 carries and a pair of touchdowns, but spent most of his sophomore year watching and learning from Smith.

“My jukes and moves I got from watching BJ,” Madden said.

One part of Smith’s game that Madden didn’t get right away was his patience to let a hole develop and exploit.

“It was tough [learning how to be patient] because I like to go fast,” Madden said.

Madden has shown throughout the season his explosiveness. It started from the first game of the season when Madden took the season’s opening kickoff 75 yards for a touchdown.

“D’Quez is probably the fastest player on the team,” Story said. “He’s got really good athletic ability and skills. I’ve been at Lanett for 12 years, and he’s probably in the top five athletes since I’ve been here. He can just so much, he brings so much to the game. Once he realized that he could be explosive and could make plays, that really boosted his confidence and his game. He finally realized that he could dominate on Friday nights.”

Early in the season, Madden was still learning how to be the primary back, a spot that he initially didn’t want to play but has now fallen in love with.

“Some of the things that were hurting him in the beginning, our coaching staff has really fixed that,” Story said. “Coach [Franco] Williams, who coaches him, has really fixed [those problems]. He really just taught him football.”

The biggest areas that Madden needed to learn was how to pick up incoming blitzes, but he has since learned how to handle that role.

Madden started to really break out a couple of games into the Panthers’ region schedule.

When the Panthers upset then-No. 1 Randolph County, Madden was a big factor in the win. After finishing the first drive with negative yards, Madden dominated the rest of the game. He finished with 76 rushing yards on 14 carries (a 5.5 yards per rush average) and 69 yards on his two catches. Overall, he finished with four touchdowns (three rushings and one receiving).

“He was poised. He was patient. He waited on the holes to open up,” Story said of Madden’s game last Friday night. “He just took his time. I saw him making his reads and making his runs.”

Madden’s spectacular stat line isn’t anything new for the junior, who has 693 yards and 13 touchdowns on just 71 carries.

Defeating the No. 1 team in the state wasn’t the only goal the Panthers crossed off their bucket list on Friday night, as they also won the region championship and are able to host at least one playoff game.

Lanett enters its final game of the regular season on Friday, as it hosts Horseshoe Bend. The Panthers are just one win away from finishing their region schedule undefeated for the fourth season in a row.

“We just have to make sure that we’re committed to the cause,” Story said. “We can’t get complacent and content just because we’ve won the region. We’ve had a lot of success over the years and people know that, so of course, they want to be the one to knock you off your mantle. We still have a really good football team and a lot of football left to play.”