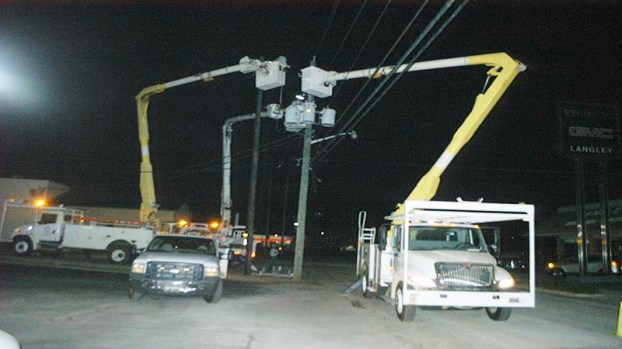 LANETT — Men from the Lanett Electric Department have been out on North Lanier Avenue the past couple of nights preparing to move four utility poles as part of the ongoing streetscape project. Some lines will be switched to behind buildings on North Lanier to ensure that they won’t be crossing the street once the new iron poles are installed. The main electric lines and cable lines will remain on the east side of the street but on the newer poles.

“We are doing this early because we want to avoid some problems we had in the earlier portions of the project,” Mayor Kyle McCoy said. “There were some situations when we had to build the sidewalk with some poles still in place.”

The streetscape contractor, JLD Construction of Opelika, will get started Monday with the final work that needs to be completed on North Lanier. This will be on the east side of the street from the Tanyard Creek bridge to Cherry Drive.

“They will first finish up on North Lanier,” McCoy said. “That will be the leg of the ‘T’ we have been talking about. Then will we’ll start on the top of the ‘T’, or First Street.”

The First Street portion will be from Gwen’s Tax Service to 6th Avenue on the north side of the street. The south side will be near the First Christian Church.

It’s presently a rough ride along North Lanier from the creek to Cherry Drive. That will be taken care of once the east side work is done.

“The work should be done in 60 days,” McCoy said. “We will then pave the street.”

“The sidewalks that will be going in will match what we have done so far,” McCoy said.

“The sidewalks will be the same width as they are in the other portions. We’ll have the same buffer areas with bedding plants, decorative lamp posts and lighting. The new utility poles will match that look.”

McCoy said it has been amazing to have witnessed the transformation of the downtown area.

“I am really excited about seeing the ‘T’ we have talked about for years coming together,” he said. “We are really pleased about what has been done on North Lanier Avenue and are looking forward to continuing with it on First Street. A small portion of First Street across from the First Christian Church was done earlier. A matching portion will be done across the street. A federal grant is being sought to complete the top portion of the T from Gilmer Avenue to Eighth Street near Veterans’ Park and W.O. Lance Elementary School.”