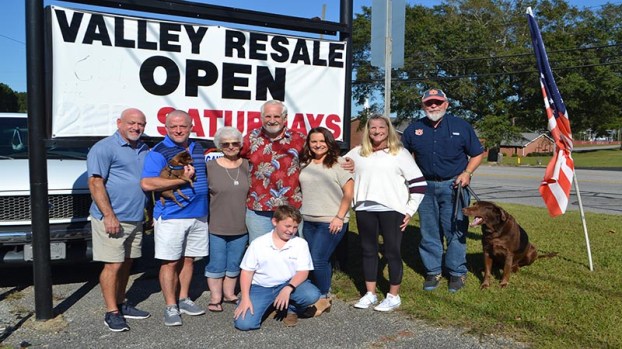 VALLEY — A Valley Resale reunion took place on Saturday. Present were members of Ray and Jackie Edwards’ extended family, some coming from as far away as Mobile and Greenville, South Carolina.

They wanted to be together as a family at Valley Resale one more time before it closes. The building is being sold, and the Edwards have until mid-November to sell all merchandise from wall to wall. The new owner, Craig McCullough of Montgomery, will be opening Cotton Crafters, one of four businesses he owns.

“Jackie and I have been blessed to have had this store for 35 years,” Edwards said. “It has been a pleasure to run it. We’ve gotten to know a lot of people and to have helped them. I couldn’t have been elected to the city council without building those relationships. It’s been great running this store with the help of children, grandchildren and now, great-grandchildren. We have made some great memories here.”

Among those who were back Saturday who spent some time helping out in the store was Chris Johnson, who’s the safety director for a Michelin Tire plant in Greenville. He was the quarterback for a Lanett High team in the mid-1970s and married an LHS cheerleader, Andrea O’Neal.

Their son, Jeremy Johnson, was a quarterback at Valley High. Chris and Andrea have two grandchildren, McKenzie, age 12, and Trenter, 10.

“They help me in LaFayette when I do the Christmas stocking program at the senior center there,” Edwards said. “I think Jeremy will be going into politics one day. He’s now a board member of the Chambers County Development Authority. He married Barry Moody’s daughter, Nicole. He’s the mayor of LaFayette.”

Ray and Jackie’s other son, Chad, is a prosecutor for the state of Alabama and lives in Daphne, Alabama near Mobile.

“Chris and Chad used to help me when I was selling out of the trunk of my car,” Edwards said. “Chad would go with me when I was buying merchandise. I think he got tired of sitting in the car for two or three hours when I was doing that and decided he wanted to do something else in life.”

At that time, Edwards was working for Al Hagedorn and West Point Wholesale Grocery, which serviced more than 50 stores in east Alabama.

One of his customers had a variety store in Alexander City at the time. He would later get into public education and eventually hold elective office. That guy, Leonard Riley, is now the mayor of Valley.

“I also worked a lot of schools,” Edwards said. “I had lunch in lots of lunchrooms.”

Somewhere along the way, Edwards decided that having a store was better than calling on those who did. That led to Valley Resale in 1985.

It was a small building when he bought it, and he’s greatly expanded it since then. He sold many different items, including furniture, rugs, tools, sporting goods and collectible items ranging from Coca-Cola memorabilia to college-related items and baseball cards.

“The only problem with those college items,” joked son, Chris, an Auburn fan, “was that he sold too much Alabama stuff.”

“I just wanted to satisfy the customer,” Edwards said. “If people would come in and ask for something, I didn’t have I would try to get it for them.”

Chris and Andrea have a home in downtown Fredonia and are trying to give it the Fredonia feel. “We are trying to find old photos of the community and to display them there,” he said.

Edwards can’t help but think that running the cash register and keeping track of the money helped granddaughter, Leslie, on her way to a career in accounting. She earned a degree in that field at Troy University’s Phenix City campus. She worked for the City of Valley at one time and is now with Wheelabrator in LaGrange.

Leslie jokes that it could be a bit disorganized putting money in the cash register.

“I had to put it in the right order,” she said.

Grandson T.J. Yates has had some ups and downs in his still-young life.

“He’s living in Auburn now,” Edwards said. “He has straightened out now, and I am really proud of that.”

Yates was a member of the 2003 Valley All-Stars that won the Alabama state title and advanced to the national Babe Ruth finals in Williston, North Dakota.

One of T.J.’s sons, Brayden, helped his great-grandpa with an unusual project. Edwards somehow acquired a 55-gallon drum filled with clothing buttons. Ray and Brayden took on the task of putting those buttons into quart jars. It took some work, but they filled up over 300 of them.

“It worked out okay,” Edwards said. “I have only eight of those jars left.”

Selling directly to the public has provided Ray and Jackie with the good life. They own a home in Todd Addition and were able to send their children to college. Their son, Chad, for example, earned an undergraduate degree at Auburn and a law degree from the University of Alabama. He now prosecutes child support cases for the state.

“If I had it to do over again, I wouldn’t do anything different,” Edwards said. “I enjoyed meeting and getting to know the people I met in the store. If you treat people right, they will remember that.”

Remembering that was a big factor in Edwards serving multiple terms on the Valley City Council. He’s also put in 16 years as a board member for the Alabama Department of Senior Services, the past 12 as the chairman. He’s been appointed to the position by three different governors. He said that he truly enjoys helping seniors all over the state, especially with the nutrition program. Senior centers in every county provide hot meals to those in the 60 and older age group every Monday through Friday. With the centers closed now due to COVID-19, the meal program is continuing with home delivery by bus.

Edwards is looking forward to this year’s Christmas stocking program. It will be the 26th year he and Jackie have done this at local senior centers, assisted living facilities and nursing homes. Each huge red and white stocking is filled with fruit, candy and gifts. It takes most of the year to get ready for it. The reward is to see the smiles on those many faces when the stockings are distributed. Great grandsons Gavin and Ky will be helping him this year.