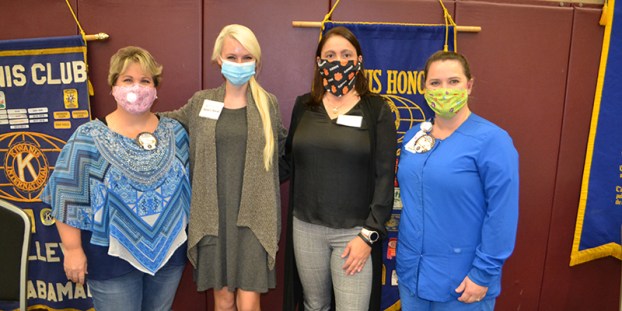 VALLEY — Tabitha Vasilas told members of the Kiwanis Club of Valley on Wednesday that recent research has revealed some disturbing trends in today’s youth.

“The current generation is unaffiliated,” she said. “Up to two-thirds of them are growing up with no moral foundation in their lives. They have few interactions with people they trust. They are struggling with loneliness and isolation. It’s alarming some of the things that are going on in the way of drug addiction and attempted suicide. Many young people are hungry for something meaningful in their lives. We work with hurting, lost kids to give them the hope that comes with the gospel of Jesus Christ.”

Vasilas, who is the director of the East Alabama Youth for Christ in Auburn, said this problem is especially grim in Chambers County. According to Vasilas, it shows up in the number of Chambers County youths that are in the Lee County Youth Detention Center in Opelika. There are youthful offenders from 12 different east Alabama counties being housed here. Almost one-third of them are from Chambers County.

There’s a crying need, she said, for responsible adults to build relationships with at-risk youth in the county. Too many of them have no one like that in their lives and are heading at break-neck speed down a dead-end road.

Vasilas said she is grateful to have partnered with people like Major T.J. Wood, other law enforcement officers and Valerie Gray of the Chambers County Development Authority in trying to uplift people in some way.

A native of Anderson, South Carolina and a graduate of Clemson University, where she played basketball, Vasilas has been in Auburn for the past four years. The East Alabama Youth for Christ is headquartered on North College Street and serves the five-county area of Lee, Chambers, Macon, Russell and Tallapoosa counties.

“Our transformational mission is to reach youth in the 11-19 age group throughout this area with authentic, Christ-sharing relationships,” she said. “Our Juvenile Justice Ministry strives to respond to the needs of incarcerated youth with relational programs that encourage conversation and build capacity for success. The ministry reaches youth in a variety of youth-serving institutions.”

“I would like for you to pray for us and to be a champion for us,” she said. “You can do that by talking about us in a positive way and to tell people about what we are doing. We are all about building positive relationships.”

In addition to reaching out to youth who have run afoul of the law, Youth for Christ also interacts with youth at the Alabama Sheriff’s Girls Ranch in Tallapoosa County, Haddie’s Home near the Lee/Chambers line and with youth at Southern Prep, formerly Lyman Ward Military Academy.

“We are trying to expand and reach more kids,” Vasilas said.

Many people are surprised to learn that Youth for Christ goes back to the World War II era. The organization’s first full-time paid employee was a young minister named Billy Graham.

Vasilas said the COVID-19 pandemic has slowed them down a good bit.

“We can’t get into the schools right now,” she said, “but God is opening other doors for us. We are doing Zoom events.”

The chapter is hosting a golf-related fundraiser along with a Comedy Cafe fundraiser.

“The community seems to be welcoming us right now,” she said. “We are not going where we are not wanted, but it sometimes takes dotting lots of I’s and crossing lots of T’s to be effective in reaching kids. We will appreciate your help in any way we can get it. We can meet with school clubs on a voluntary basis. That’s a good way to build relationships. We do trips and camp with the kids when we are able.”

Lots of events take place at the East Alabama’s chapter headquarters at 1400 North College in Auburn.

“If there is an opportunity for our worship team to come out and do a program, we’d love to do that,” Vasilas said. “We have helped a lot of families who have followed up with us. We have some obstacles to overcome, but we have seen God do some pretty cool stuff.”

Vasilas said that she will go wherever God sends her. She said that she had a good situation running a children’s home in South Carolina when she felt God leading her somewhere else four years ago. She said she can’t explain it, but she knows that God wanted her to be in Auburn. She relocated there without a job and has found her way through faith since then.

Headquartered in Denver, Colorado, Youth for Christ has an estimated 160 chapters in the U.S. It’s also in more than 100 countries worldwide, including 22 chapters in the Middle East and North Africa. It’s been in Auburn since 1980.