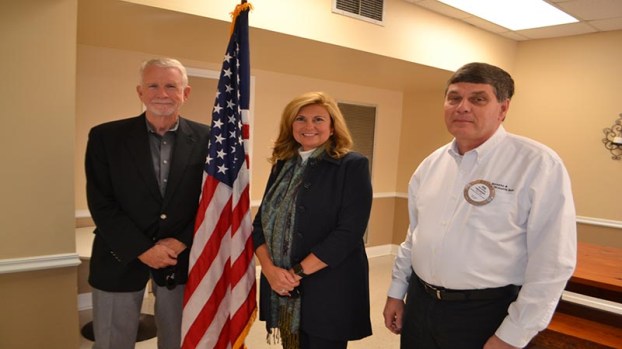 LANETT — Claire Bradfield is new to the staff at Springwood School. She works with admissions and is a community engagement specialist. She talked about her new position and her goals for the school at Thursday’s noon hour meeting of the West Point Rotary Club, held inside the Jane Farrar Event Center in downtown Lanett. Bradfield has ties to the local community and to Springwood.

Her son, Sam Bradfield, is a member of Springwood’s largest ever graduating class in 2020 and is continuing his education at Georgia Southern University. Her husband, Jamie Bradfield, owns a paving and grading business.

“We are really thrilled to have her on board,” said Head of School Lawrie McCown in introducing her.

Noting some artwork of Little Nadine’s Dollhouse on the wall inside the event center, Bradfield said it brought back memories of her growing up in Lanett.

“I used to walk by that dollhouse every day,” she said. “My friends and I passed it on the way to Lanett Junior High.”

She was living here at the time with her family. Her dad, Jack Nevins, worked for WestPoint Pepperell. He was later transferred to Dalton, Georgia. That’s where Claire graduated from high school. She has a daughter who graduated from LaGrange High. She wanted something different for Sam. Springwood really wasn’t under consideration until Sam took a visit there. It took that one day to change his mind.

“Being at Springwood was the biggest blessing for my son and our family,” Bradfield said. “Sam told me he didn’t know what school could be like until he went to Springwood.”

Springwood School has a significant presence in the local area. It has an estimated annual economic impact of at least $2.5 million.

Bradfield said she doesn’t know all the answers but will work to have constant improvement.

“Our goal as a school is to be better,” she said. “Springwood is a beautiful campus, and people love being there. It’s a diamond in the rough to a lot of people, but it has made a big impact. If you are looking for a school, we hope you consider us. I would love to show you around.”

Springwood offers a rigorous academic program and has a long proven record of preparing today’s high school student for the demands of college life down the road.

“We need students who can do well academically, who are of good character and who have certain skills sets,” she said.

Bradfield said that Springwood is in need of a more diverse student body, not for diversity’s sake, but to prepare students for the real world.

“We are very much aware that we will need to serve in a diverse world,” she said.

Springwood is doing extremely well in its international program.

Half of this year’s senior class is made up of students of Asian or European backgrounds.

A lagging area is the school’s African American enrollment, which is around seven percent.

“We need to do a better job there,” Bradfield said.

Like Sam, anyone who visits the Springwood campus finds a laid-back place with friendly, helpful people.

It’s a great location to learn and grow academically for the student who wants to earn a four-year degree, and in many cases, advanced degrees.