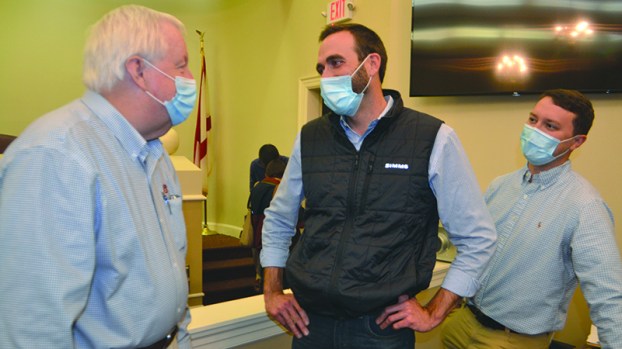 VALLEY — The Valley City Council on Monday approved an ordinance that could pave the way for the development of a major housing subdivision on the west side of town. The rules were suspended and the council unanimously approved the ordinance, which includes a development contract and lot purchase contract with Holland Homes, LLC, Auburn, with respect to property owned by the city off Combs Road.

Holland is proposing to build the subdivision in 12 phases with each new phase being financed by a $1.1 million investment which rolls over as new homes are being sold in the previous phase. At build-out, there could be up to 350 new homes in the $150,000 to $200,000 price range.

These will be smart homes, or new homes built with smartphone technology in mind. A homeowner can know everything going on inside the home when they are away. It will be the first effort by Holland Homes to build a smart neighborhood in a small town. Their previous efforts have been in suburban areas near large cities. Holland’s existing smart neighborhoods have been developed in cooperation with Alabama Power.

Holland LLC President and CEO Daniel Holland commended Mayor Leonard Riley and members of the city council in having done good work in acquiring land for future industrial and commercial development. This, plus the coming of John Soules Foods, creates opportunities for residential development.

“There’s a need to develop the market so people will come here to live,” Holland said.

T.J. Johnson, a civil engineer with Holland LLC, discussed a master plan that has been developed for the new subdivision. It shows 348 lots with a commercial zone, walking and biking trails. A schematic drawing of the site was shown on the flat-screen TVs inside the council chamber as Johnson spoke. The planned site will be bisected by a large grand boulevard with what appears to be a roundabout at the center.

“This will be a really big project, and we will do it in phases,” Johnson said. “It’s an exciting thing and should be profitable for the city over time. I’m sure that having 350 new homes will be a great thing for the city.”

Johnson said the Combs Road site will have an estimated 6.5 acres of parks and 20 acres for commercial development.

“Before we break ground on phase two you will have recouped your initial investment on phase one. Over time, your investment will pay back fivefold.”

Chris Busby of the Chambers County Development Authority (CCDA) staff explained how these projects work according to state law. He said that it’s permitted by Amendment No. 772 to the Alabama 1901 Constitution. Adopted in 2004, it allows city and county governments to invest in “things of value that benefit the public good.” This can include land, infrastructure and site acquisition for the purpose of conferring it to a developer.

“City and county governments can do things that benefit the public,” Busby said. “New housing benefits the public. Property values increase and there are more recreational opportunities.”

Council Member Jim Jones said the city had been burned some 10 years ago by committing to what was then known as an improvement district. The city had to authorize two bond issues on it, committing itself to the widening of Fob James Drive and Fairfax Bypass. The Greater Valley Group built several apartment complexes and had plans for a commercial development that never came to fruition.

Jones said that what was being discussed sounded good, but he wanted to know how it was different from what the city had gone through before.

“It sounded great, but we had to have two bond issues,” he said.

City Attorney John Ben Jones said the major difference is that the city has very little risk in what’s on the table now.

“Let me play the devil’s advocate and say we build three new houses and two of them haven’t sold in five years,” Jim Jones said.

“If two of those three homes haven’t sold in five years we have a much worse problem on our hands,” Holland said. “The national economy has tanked. No one knows what tomorrow will bring, but this is totally different from what you went through 10 years ago. Real estate has been really good for the past 10 years.”

In 2009-10, the national economy was still recovering from a major recession and housing market disaster that had taken place in 2008.

Jim Jones said that there’s a definite need for new housing in Valley and that what was being discussed sounded good.

“You are in the best-case scenario,” Holland said. “You own the land.”

John Ben Jones said the city is in much better shape than it was before.

“We have recourse in what to do compared to what happened before,” he said.

“The improvement district was not a good thing,” Jim Jones said.

Holland said that his company would be bringing something that hasn’t been available before: quality housing in an affordable price range.

“If we approve this tonight, how soon can we get started?” asked Council Member Randall Maddux.

“We have a lot of the pre-conditions already done,” said Johnson. “I think we can be knocking down trees around the first of January.”

“We want to have a product on the ground when the market is good,” Holland said. “Housing sales usually pick up in the spring and remain good through the summer, then they taper off.”

“We look forward to working with you,” Jim Jones said. “We need quality, affordable housing in Valley.”

“We want the citizens of Valley to know this will be a long-term project,” Council Member Jim Clark said.

It could take between 10 and 15 years to reach the total build-out of 350 new homes.

When the Combs Road project reaches two or three phases, that alone would be the biggest subdivision development in Chambers County in a long time.

Kimberly Carter of the CCDA staff said that it’s highly significant that the new subdivision is being built the “smart” way.

“They will be some of the most energy-efficient homes in the state,” Holland said. “The power bills will be relatively low.”

Smart homes allow the homeowner to control appliances, thermostats, lights, security systems and other devices remotely using a smartphone or tablet through an internet connection. Smart homes can be set up through wireless or hardwired systems. Smart home technology provides homeowners with convenience and cost savings.

Riley said he had met with Holland and Johnson on several occasions to work out several drafts of the ordinance that was presented Monday night.

“Looks like we have a deal,” he said following the council’s unanimous vote.

The ordinance is some 24 pages in length. According to its developer contracts, the developer (Holland Homes LLC) will plat and develop the residential lots on land owned by the city. The city will reimburse the developer for a portion of the development costs and will agree to sell to the developer some or all of the lots for a purchase price that may be less than fair market value.