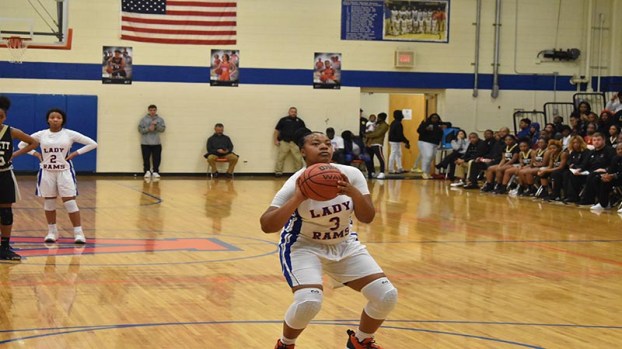 When the Valley girls basketball team takes the floor for the first time of the 2020-21 season, it will look extremely different than the team that reached the second round of the playoffs.

The 2019-20 team had four seniors, three of whom started. The fourth was the first player coming off the bench. In the starting lineup, there were two sophomores, one of which has transferred.

“This year, we’ll be a young bunch,” head coach George Grimes said. “We lost four seniors. I had one that returned but decided not to play this year and I had one that left and went to a different school. I really only have one starter coming back and that’s Anijiah Patrick.”

Patrick was the team’s starting center a year ago and got a lot stronger as the season went on. Now as a junior, she has the most experience of the group of 10 players.

“She will be depended on more this year,” Grimes said. “Last year, she was able to sit back and be the third wheel behind Ana [Magby] and Arteria [Florence]. She’s got to be more assertive on the offensive end and be looking to sore and create in different ways. She won’t just be a post player this year. She’ll probably be a little bit of everything, a little small forward and guard some. Defensively, she’s been in the system long enough. She knows the rotation, she knows the lingo. She knows the assignments, so she can help the younger ones catch on quicker.”

Alongside Patrick, Grimes is hoping that his returners will be able to step up and play some big minutes this season.

“I’m looking for Patrick, along with Darce Wright, Anaiya Hatchcett and Janiya Phillips to make strides as far as taking on more responsibility and being the lead for the team,” Grimes said. “We’re 10 strong and all 10 are going to play and have some type of role. Everybody is going to fill their role and we have to continue to work together as a team.”

Wright saw a good amount of minutes throughout the previous season, as she rotated in with the other guards as a freshman.

Last year, she was trying to learn more about the game, as she didn’t play during her junior high years, but now as a sophomore, she will take over the role from Ana Magby, who finished with more than 1,000 points in her career.

One area to watch will be who handles the ball for the Rams this season. Jayla Lancaster was the team’s starting point guard, but Magby and fellow senior Anteria Florence brought the ball down the floor throughout the game as well.

“It’s difficult, but not impossible to overcome,” Grimes said. “We’ve had some years where we didn’t have true ball handlers, but we were able to rely on our defense to make easy baskets and turnovers. We have a couple of additions, one that’s coming from the junior high in Lizzy McManus and we had a transfer in Jaylah Sturdivant who will help with our inside presence. If we can create turnovers with our defense as we’ve done in the past, then believe our ball handling will be alright.”

Valley was one of the teams in the county to move up in classification this season.

Its region is made up of Opelika, Russell County and Eufaula. Even though their region is tough, Grimes still says the goal is playing in Birmingham.

“The goals are still the same. The outlook is still the same,” Grimes said. “We’re still looking to make a run for the state championship. It’s a different classification of course, but it’s not our first time in that rodeo. We’ve moved up to 6A before. The biggest thing is just try to be ready by the time February gets here.”

The Rams start their season on the road at Bullock County on Friday. The biggest thing Grimes wants to see out of his team on Friday is their ability to execute a game plan.

“I want to see the jitters out of us,” Grimes said. “First game on the road, they’re going to be a little nervous. I just want to see them come out and play. Just work on the few things that we have put in so far. The few things that we have installed, I want them to execute it, play hard and play fast. I hope they realize that you’re going to make mistakes. That’s part of the deal. Nobody’s perfect, but we just have to keep improving. The more we play, the more we improve.”