Majority of House members vote for 2nd impeachment of… 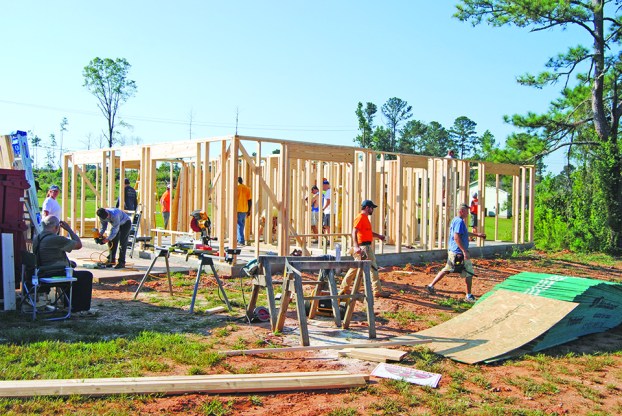 LANETT — The Chattahoochee Fuller Center Project (CFCP) is finishing up on two home construction projects in the Beauregard community and is looking to build two new homes in the Valley area in 2021.

The two new homes in Beauregard will raise the total to 20 homes built by the CFCP in the storm-damaged community. Eleven of those homes were constructed in a blitz build in October 2019. In March 2019, a devastating tornado ripped through the Lee County community, killing 23 people and destroying many homes. In the months following that tragedy, the CFCP was called on to help the people of Beauregard get back on their feet again and back to a sense of normalcy.

One of the homes presently under construction will be a new home for Carol Dean, whose husband was killed in the tornado. His name was David, but many people knew him by the nickname Road Dog, something he got from his love of riding motorcycles.

A second home is being built for the Bohannons, a young couple who lost everything in the storm.

“We’ve teamed up with Mend, a charity with the East Alabama Medical Center,” CFCP Executive Director Kim Roberts said. “EAMC Chaplain Laura Eason has been very helpful in the process. We talk to her almost every day. The men from New Birth Ministries have been very helpful as well. I don’t know what we’d do without them and Pastor Weymond. It’s a lot harder to get groups together now than it was before COVID. I hope we will be over it soon.”

Roberts said the CFCP has sites for a new home in Lanett and a new one in West Point.

“We are going through the application process now,” Roberts said. “Anyone can pick up an application at our ReUse Store in Lanett.”

The CFCP carefully screens new prospective homeowners. There have been very few instances when a new homeowner couldn’t make ends meet and had to leave. The Fuller Center doesn’t give away homes. It provides the means of making decent homes affordable for deserving people. Rather than having a $200,000 mortgage, the new homeowner is living in something in the $60,000 price range. The lower price is made possible because of the volunteer labor and donations made by sponsors.

Roberts said it has been a new experience for her and her assistant, Robin Pierre, working outside in cold weather.

“We want to get the Bohannons and Carol Dean in their new homes,” she said. “We will just have to deal with the rain and the cold.”

The winter weather is quite a contrast from what they went through during the blitz build in October 2019.

“It was in the fall, but it felt like the hottest summer ever,” Roberts said. “It was between 90 and 100 degrees every day, but we got 11 new homes built. We had volunteers from all over the country to help us do it. We got it done, and got people moved into new homes.”

The October build was featured in “Project Joy,” which was on the Hallmark Channel during the 2019 Christmas season.

“They did a wonderful job, and they were great to work with,” Roberts said.

The Beauregard build was difficult, Roberts said, but she’s glad she did it.

“We built 18 houses in seven months in 90-degree weather,” she said, “and we did it with mostly volunteers. What’s so funny is that we weren’t planning to be part of it.”

Roberts said that she and CFCP President Curt Johnson were taking some supplies to Beauregard one day to help out when she received a call from Laura Eason.

“She told us she wanted to meet with us,” she said. “Robin and I went to talk to her, and she told us they needed three new homes built the next month. I didn’t know whether to laugh or cry. I can remember getting real quiet and hearing the Lord speaking to me, telling me it was something we needed to do. I told Laura we’d do it. When we got back in the car, Robin asked me, ‘What were you thinking?’ I told her that me and her both needed to do lots of praying. That’s how it started. It was hard on us, but it worked out well, and I am glad we did it. We got to know some really beautiful people in Lee County.”

To build 11 new homes, more than 500 volunteers came from all over the U.S. The Beauregard tornado made national news, and lots of people wanted to help people get back on their feet.

“It was such a huge undertaking,” Roberts said. “We had to build 18 sets of walls. Robin and I got only four hours of sleep almost every night for seven months. It was our first time helping with a disaster. We met families who had lost loved ones and had their whole world torn apart.  Those people are previous. We wanted to do all we could to help them, We were on an emotional roller coaster for seven months. When it was over, Robin and I were completely burned out. When needed some time to get over it.”

The next task for them was to move the ReUse Store into a bigger building right next door on Gilmer Avenue in Lanett. It was a different kind of challenge, but it took some time to get up and running. COVID was a factor in getting off to a start, but the store reopened in June. Business has remained steady.

“We want to thank the public for continuing to support us,” Roberts said. “What we make here will help us continue building homes.”

“We have a good staff,” Roberts said. “Robin is the store manager. She has two employees and volunteers to help her. Someone from New Birth Ministries is here almost every day.”