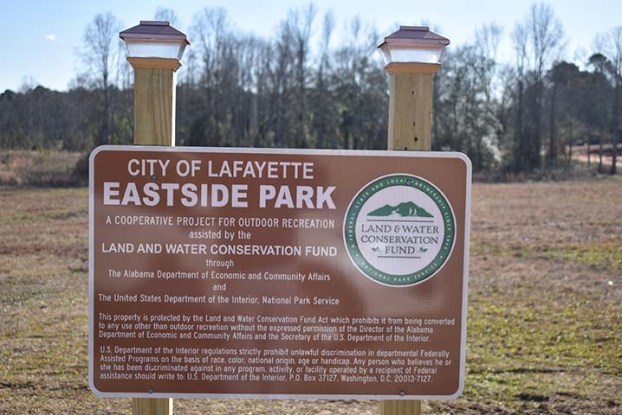 The new LaFayette city park has been a big desire for the city since 2016. In the four years since it was announced, the park has been worked on in phases.

The first phase, which was five of the 52 acres, opened in 2018. The first phase included a playground, picnic pavilion and parking lot, but that is only a fraction of the projected finalized park.

Overall, the master plan calls for 2.5 miles of nature trails, track and sports fields, a ridgetop overlook, expansion to the cemetery and an open-air pavilion.

The park’s top priorities, based on a poll of LaFayette citizens, was given to the LaFayette City Council on Monday. Those priorities included paved walking trailers, gathering places, which include a picnic, grilling and reunion areas, and a place for children to play. So far, the playground is the main area of the park that has been completed.

At its meeting on Monday, the LaFayette City Council received an update on the park.

As of now, there are ongoing conversations with the Community Foundation and the McRae Fund to secure endowment funding. In those conversations, there are five main points of discussion:

4Working on developing the structure for a non-profit organization to serve as an advocate for city park development.

4A non-profit organization to be led by the board of directors, who will serve as the cheerleaders and fundraisers for the city park and the endowment and community volunteer/friends activities.

4The endowment will fund (in perpetuity / forever) the maintenance activities of the city park, which is key to the park’s success.

4The city will also contribute funds for operations and capital improvements.

4The budget for the maintenance endowment fund is under development with the Community Foundation / McRae Fund.

Those items are expected to be reviewed at a council meeting in February.

The city park was one of the main points of discussion at the city’s Parks and Recreation Committee meeting late last year.

The committee also wanted to find a way to open the new 52-acre park quicker.

“Five or six years ago, I thought they had everything, and they were going to get it set up,” LaFayette Mayor Kenneth Vines said at that meeting on Dec. 30. “By now, I thought the park would be open. That’s why I’m pushing it.”

As of now, the funding of the park is being completed in phases. Once one part of a phase is completed, the city will receive funding to work on a different section of the park.