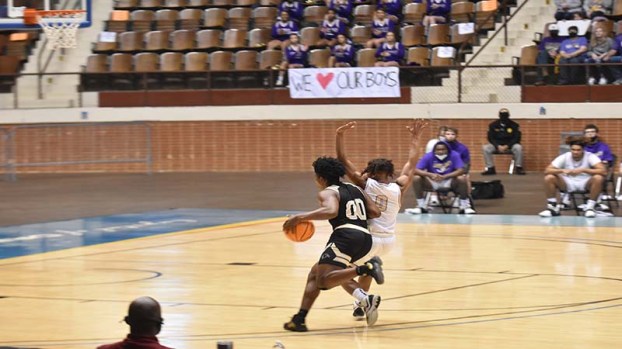 From nearly a month-long shutdown to a fire that took out its gym, the 2020-21 season has tested the Lanett boys basketball team, but it overcame those obstacles, winning the area and advancing to the 2A Southeast Regional Championship. The Panthers overcame another obstacle on Thursday in the form of a drawn-out third-quarter run against Geneva County.

The Panthers overcame that run, defeating Geneva County 62-46 and claiming a spot in Birmingham for the 2A state semifinal game.

“It feels great,” head coach Tay McCants said about going to Birmingham. “My guys have been fighting all year. At the beginning of the year,  we were the underdogs and our area was the underdog. We’ve just been proving everybody wrong. Hats off to my guys for working hard today.”

Coming out of halftime, Lanett was up 33-17. It had dominated the first half, shooting 50 percent from the floor and had knocked down a couple of 3s. It was dominating the glass, outrebounding Geneva County 17-9 in the first half and had six steals compared to just six turnovers.

But just as it did during its regional matchup against LaFayette, Geneva County came out of the halftime break with a lot of energy and more importantly, began taking care of the ball better.

The two teams traded shots for the first couple of minutes of the quarter, but after Lanett senior Kintavious Dozier drilled a 3-point shot with 4:40 left in the quarter, the Bulldogs took over, finishing the quarter on a 15-0 run.

In his speech to the team before the fourth quarter, McCants preached the importance of playing with energy, something he said the team lacked for the second half of the third quarter.

Geneva County tied the game with a 3-point shot in its first possession of the fourth quarter. Dozier responded, hitting back-to-back 3s to give Lanett a six-point lead it held for the remainder of the game.

After Dozier hit the second 3-point shot, the Panthers, who normally try to play up-tempo for the duration of a game, slowed the ball down, allowing, mainly Dozier, to dribble the ball around the top of the key for spurts of 30 seconds at a time before taking a shot.

“It was kind of crazy because we’re used to playing so fast,” McCants said. “A couple of my guys started to get winded. My big man, Caden Story, started getting cramps and Dozier’s shot had started getting short, so I knew he legs were gone. We decided to slow it down and make them play a little bit of defense instead of getting a lot of quick shots.”

While it was taking time on offense, Lanett also shut Geneva County down offensively for most of the fourth quarter. The Bulldogs finished with just five points in the fourth, hitting just nine percent of its shots (1-of-11).

Last season was Dozier’s first chance to play in Montgomery or Birmingham. Though he finished as one of the Panthers’ top scorers during the playoffs last season, he struggled to find his shot consistently once Lanett started playing at the bigger venues. On Thursday, Dozier excelled.

He finished with 15 second-half points, totaling 27 in total, hitting 60 percent of his shots. He also finished with six rebounds, five assists and five steals.

“I think last year he was just happy to be at Birmingham and embracing the moment,” McCants said. “I talked to him last night and he told me ‘coach, I got you. Just put the team on my back and I got you.’ Last year, I didn’t see any leadership from him. Today and all this season, Dozier has been carrying this team and our guys have been jumping on the bandwagon.”

Lanett will play the winner of Sheffield and Hatton on Wednesday, March 3 at 11:30 a.m. CT in Birmingham for a chance to play in the 2A championship game.