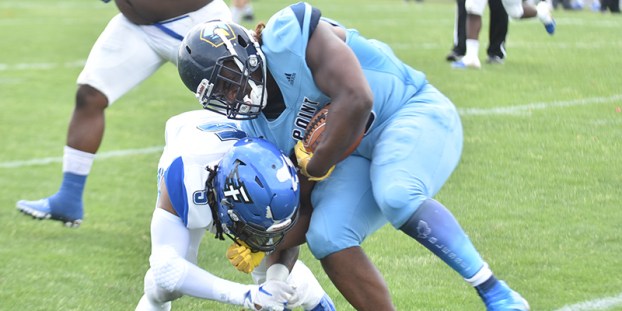 For the third straight game, Point football was in a close fight at the end of the first half, but just as they did in their previous two games, the Skyhawks struggled to put together drives and get timely stops, resulting in a 38-21 loss to Faulkner.

The loss was the second time Point has lost to Faulkner this year, as it lost 21-15 in its second game of the year.

“Usually when you face them for a second time, you feel like you’re a little more prepared because you’ve seen them. They didn’t do anything different than they did the first time. It’s the same old story for us — you dig yourself into a hole and now you spend the rest of the game trying to dig your way out of the hole,” head coach Julius Dixon said. “We’re just not where we need to be, in terms of falling behind early and being able to battle back. We’re good enough to scare people. We’ll come back and make it close, but we have to have an attitude of finishing.”

The loss extends Point’s losing streak to three games and drops its record to just 1-6 on the season. With the loss, Pont failed to win a home game this year (0-4) for the first time since the 2016 season, when it finished 0-2.

“As a head coach, I apologized to them. I apologized because as a coach, it’s up to me to figure out how to get that done,” Dixon said. “That group [Point] is a lot better than their record, but people are going to judge them by their record. I watch them every day, and I know how talented they are. As coaches, we have to figure out a way for them to realize how special they are. They only have one more opportunity to get that. I’m coming in tomorrow, and my goal is to send those seniors out as winners.”

After starting out the game with a 3-and-out, Faulkner scored from its own 15-yard line. The Eagles added to their lead, as they scored again from deep in their own territory, scoring on a 99-yard passing play.

Point answered with a touchdown run by quarterback Keenan Wise early in the second quarter, capping off an eight-play, 42-yard drive that was set up by a Chase Turner interception.

Point scored one more time in the first half, as quarterback Brenton White hit Timothy Gart for a 37-yard score, but the Skyhawks trailed by seven at the half.

“Just about everything we were trying was working in the first half. The guys were believing. We got some good field position, and on one drive, we took it and march down the field. It’s just confidence,” Dixon said. “Once they get out there, rocking and rolling and we have some success, the team is hard to stop. It’s when we hit those speed bumps. When we hit those speed bumps, we’re not able to overcome a foolish penalty, or we have them in 3-and-6 and we make a call where we have all the gaps covered, and the quarterback pulls it right where we should have someone. It’s stuff like that we have to fix. That gives us the best chance to be successful.”

Point never got within seven points again, as Faulkner scored on its second drive of the second half and scored the game’s final 10 points.

White finished with 91 of the 177 passing yards for the Skyhawks, while Wise threw for 83. For the second straight game, Dixon and his coaching staff have rotated quarterbacks during the game to see who would give them a better chance to win the game.

“They’re pretty equal, so we’re just rotating them to see who is hot,” Dixon said. “Both of them had good drives, but until someone separates themselves from the other one, you have to try both of them.

Point will play its final game of the year on Saturday, April 10 at St. Andrews University.