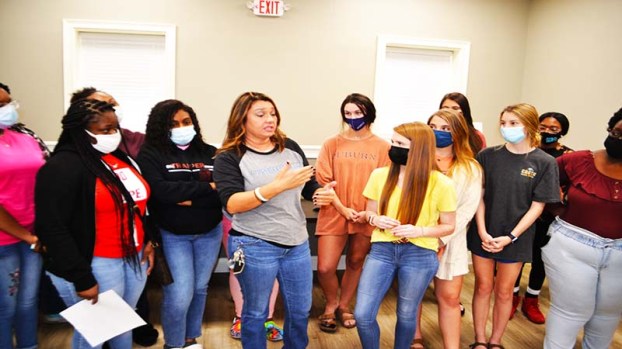 The mother of Aniah Blanchard spoke to the Chambers County Junior Ambassadors Wednesday about the dangers that could be lurking out there for girls and young women. Angela Harris (at center) painfully recounted what had happened to her daughter when she happened to be alone late at night while making a brief stop at a gas station in the fall of 2019. Harris told the girls that it’s a dangerous world out there and to always have a plan when you are out in public, especially at night. She told them to avoid being alone and to be especially wary when making stops at convenience stores and the big box stores.

VALLEY — The mother of Aniah Blanchard, who was kidnapped and murdered in 2019, spoke about her daughter’s death to a group of Chambers County youth on Wednesday evening.

Angela Harris told a group of Junior Ambassadors from the Greater Valley Area Chambers of Commerce that what happened to Aniah, a 19-year-old college student, could happen to any of them.

In October 2019, Aniah was living in Auburn and taking classes at Southern Union State Community College in Opelika in preparation of being an undergraduate student at Auburn University. On Oct. 23, she drove back home to the Birmingham area to attend the funeral of a family friend who had died in an automobile accident. She drove back to Auburn that evening because she had classes to attend the next day. A few minutes before midnight she informed her roommate by phone that she was close to being home.

When she didn’t show up that night or the next morning, the Auburn Police Department was notified that she was missing. Shortly afterward, a task force was formed to look for her. Several law enforcement agencies, including the FBI, the Department of Homeland Security and the Alabama Department of Forensic Sciences participated in the search. The case made national news. On Oct. 25, authorities located her abandoned car. It had been wrecked and was at an apartment complex in Montgomery. The vehicle contained evidence of foul play — there was blood on the front seat.

On Nov. 6, the Auburn Police Department released an image from a surveillance video of a “person of interest.” He was later identified as 29-year-old Ibraheem Yazeed of Montgomery. The video showed him at a gas station where Blanchard stopped the night she disappeared. He is seen buying alcohol and looking in her direction. He is also seen exiting the passenger side of the vehicle. A video from another gas station shows him re-entering the passenger side of the same vehicle.

At the time of the incident, Yazid was free on a $295,000 bond. He had been charged with possession of marijuana, robbery, kidnapping and attempted murder. The charge was connected to an incident that had taken place in Montgomery in January 2019. Four assailants are said to have robbed and beaten two men in a Montgomery hotel room. One of the victims was a 77-year-old man who was “left unconscious, unresponsive, severely injured and near death.”

In 2012, Yazid was accused of attempting to kill two police officers by ramming his vehicle into them. In June 2020, he was charged with the 2018 murder of Stephen Hamby and the attempted murder of a woman who was with Hamby when he was killed.

On November 7, 2019, Yazid was arrested in Pensacola, Florida. He was extradited back to Lee County, where he has been held without bond. Prosecutors are now seeking the death penalty for Blanchard’s murder. On Nov. 25, her remains were discovered in Macon County.

In recalling this terrible tragedy on Wednesday, Harris fought back tears as she talked about what a wonderful person Aniah had been.

“She was an amazing girl,” she said. “She loved life, loved people and had a heart of gold. I’ve never known anyone else who was as caring as she was and who enjoyed life as much as she did.”

Harris said she had some doubts about her leaving home for college in 2019.

“As a mother I had some worries,” she said, “but I thought that she would be in a safe place living in Auburn and attending Southern Union. She wanted to be an elementary school teacher and to coach softball.”

Harris nearly broke down when she talked about the last time she saw Aniah.

“It was after the funeral,” she said. “It must have been about seven o’clock. We were seated on a pew in the church. She was with her aunt, my mom and me. She told me she needed to get back to school. I hugged her and kissed her on the cheek. It was the last time I ever saw her.”

Harris called her later that evening to see if she had gotten back to her apartment but got no answer.

“I thought she was probably tired and had gone to bed as soon as she got there,” she said.

She was more concerned when she called the next morning and got no answer. A couple of hours later, Aniah’s brother, Elijah, who was attending Auburn, called to say that she had not come home.

“I got dressed and flew to Auburn,” she said. “‘Where was she?’ I kept asking. ‘This doesn’t make any sense.’ I wanted a reasonable explanation, and there wasn’t one. I had a sense of dread that something terrible had happened to her. Aniah always came home.”

During the search for Aniah, Harris wanted to do something in her honor.

“I knew I had to tell as many people as possible how dangerous things are out there. This happened because she was by herself when she stopped at a gas station late at night to buy potato chips. Somebody was there looking to kidnap someone. Don’t tell yourself ‘ this can’t happen to me because I live in a safe place.’ You may think nothing is going on, but it is. People are always traveling through.”

Harris urged the young girls present to have a plan to be safe.

“Safety is about every situation in life,” she said. “You can be in a bad situation with your boyfriend. You need a plan to deal with any situation. If something like this could happen to Aniah, it could happen to anyone anywhere. There are things going on out there you have no clue about, and it’s not just girls that are the victims. Guys can get themselves in bad situations, too. Both sexes can be victims of human trafficking. There’s no reason someone wouldn’t pick any one of you to be a victim.”

Having a plan, said Harris, is to think ahead about what you will do when you leave home.

Sometimes it’s not wise to be a Good Samaritan, especially when you are alone.

“Be careful when people ask for help,” she said. “Don’t interact with strangers. When you are out somewhere, you are on a mission to go in and get out safely.”

“It can save your life,” she said. “Put it under your car seat. It will be easy for you to get and the attacker doesn’t know it’s there. Never let someone take you to a remote location.”

Harris recommended enrolling in self-defense classes if that opportunity is available.

“Learn how to defend yourself,” she said. “Being a victim is not something that always happens somewhere else. It can happen here, too. There are no safe areas anymore. People can be anywhere who will do bad things.”

“I would give anything to see my baby’s face one more time,” Harris said. “I would love to hug and kiss her one more time, but I can’t.”

There is one way people can help remember Aniah — by voting for Aniah’s Law in 2022. It will be on the ballot in Alabama next year. The bill unanimously passed both the Alabama House and Senate. The bill will prevent people from being bonded out of prison when they have been charged with violent offenses like assault, attempted murder and kidnapping.

For more information about Aniah, go to aniahsheart22.com.

“I hope you guys have learned something today,” Harris said. “I encourage you to have a plan if you go off to college. Find out what your security resources are and never be by yourself. Always be with friends. I would like for you to see Aniah’s memorial page on Facebook. I want you to see her smile and to laugh. I want you to know what a special person she was. I can’t get her back, but I can live my life for her. I can’t let some crazy man kill my daughter and not do anything. When she fought for the gun that night, I will always believe she was fighting for us, to be with her family again. I believe we can make this world a better place if we can help people avoid being the next victim.”