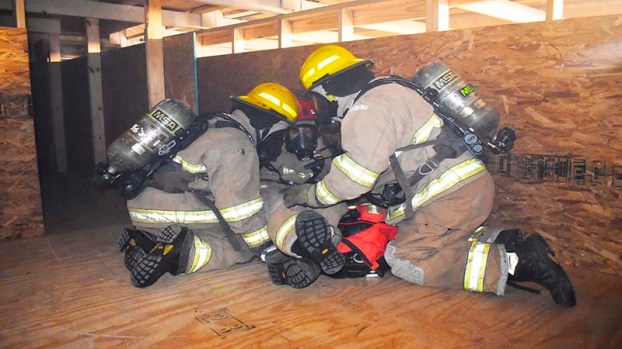 In late February, the East Alabama Fire Department began the first firefighter rookie school in Chambers County, a milestone that Fire Chief Kerry Pickard says he is extremely proud of. “We’re excited,” Pickard said. “These guys have worked hard to get this place built up. It’s come a long way.”

The training center is located on the old Fairfax Mill site, adjacent to Fire Station No. 3. The work on the training center was slowed briefly in 2018 when EAFD took over EMS. Once the transition was complete, the build picked up steam.

Prior to this inaugural rookie class, Pickard said they had to send rookies to Auburn.

“It’s a logistical issue having to send people off, and we save money by doing it here,” Pickard said. “When we bought this property years ago, that was one of our primary goals out here was to convert all this for future use so we don’t have to do that.”

“We’re very happy and pleased, as well as excited to be the first department to host the first rookie school in Chambers County,” Richardson said.

Pickard said the training center itself is a work in progress and the rookie school has helped determine the next steps.

“We’ve learned a lot from this rookie school, some things we’ve got to add, and get the building out there put together,” Pickard said.

According to Deputy Fire Chief Jacob Geiger, the idea for a recruit school was born roughly three or four years ago when the idea of the training center came about.

“One of the main goals in developing the training center was so that we could conduct and host our own recruit schools here in Chambers County,” Geiger said.

The recruit school is a 10-week program that mixes classroom and field training necessary to become certified.

Once completed, a recruit will leave the school with four certifications.

“When they finish school, they come out with their firefighter I and II certification, HAZMAT awareness and operations certification and the rapid intervention crew certification,” Geiger said.

This class consists of 10 rookies from Phenix City, Tuskegee and East Alabama.

On Wednesday, the recruits gathered at the training center in Fairfax to take part in a Rapid Intervention Team (RIT) drills. In this particular drill, recruits simulated the rescue of a firefighter who is injured and trapped inside a building. Utilizing a maze that has been constructed at the old wastewater facility in Fairfax, one recruit enters playing the role of the downed firefighter.

The maze itself is a multi-level structure that is built to be confined and compact with minimal lighting once inside.

There are multiple trap doors so that the maze can be reconfigured quickly along with several obstacles throughout.

Once received, a team of two, repeated the details of the call to confirm before entering. The team then entered the maze to locate the down firefighter, feeling their way along in a dark, confined space. This drill helps prepare firefighters for real-world scenarios and teaches them different search patterns.

“If you think about going into your normal house, you know where everything is in your house, even if you turn your lights off to go through at nighttime,” Pickard said.

Once they arrive, the RIT team assesses the situation, takes appropriate action and then brings the firefighter to safety.

The training center was designed not only to host rookie schools but to also be able to host various certifications.