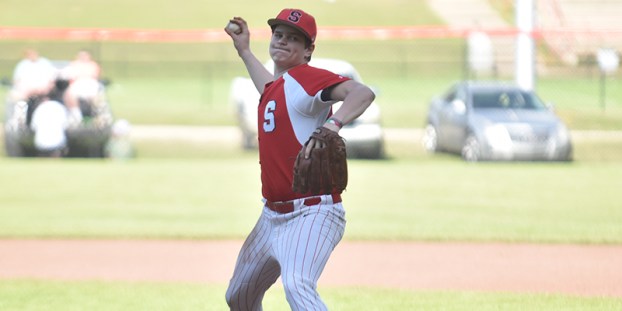 The Springwood baseball team clinched its playoff berth for the third consecutive year on Thursday, but unlike in years past, the Wildcats had to earn its playoff spot because of the AISA’s reclassification this past school year.

Springwood locked down the third and final spot with a 12-4 win against Southern Preparatory Academy.

“It feels really good, being a senior, having to earn your way into the playoffs,” senior third baseman Trevo Williams said. “It’s a really big deal for me. I’m glad we made it this far.”

The Wildcats scored three runs in the top of the first inning to take a lead it never gave up.

Junior Ethan Plank led off the first with a bunt single. He stole second and advanced to third on a throwing error by the Southern Prep catcher. He scored on a sacrifice fly from Dallas Pearson. Springwood knocked in the second run an infield single by Williams. Williams scored on a wild pitch for the third and final run.

Southern Prep cut the lead to two runs, as it led off the bottom of the first with three consecutive singles, but a good relay from Williams to Pearson at the plate on a fourth single limited the damage to just one in the inning.

Springwood tacked on two runs in the second and third innings to open the game up, which was highlighted by a Cooper Champion triple to right-center field.

“We’re most definitely young. I appreciate all the young kids stepping up. That means a lot,” Williams said.

Overall, three freshmen or younger finished with multiple hits in the game.

Freshman Luke Hudson started the game for the Wildcats, throwing 2 ⅓ innings. He struck out five batters and allowed just one run while on the mound. Eighth-grader Christian Hopkins closed out the game, throwing the remaining 4 ⅔ innings. He allowed three runs off four hits but struck out eight batters.

“The young guys have kind of been the engine this year. I think the young kids, they’re obviously the future of this program. I’ve told them they can be as good as they want to be,” head coach David Strickland said. “Right now, they don’t get intimidated by anybody. They’re the ones that don’t care who they play, and it shows. It’ll be exciting to see how they pane out in years to come.”

With the win, Springwood also moves above .500, putting its record to 8-7. If the Wildcats win out, they could finish with more wins than the previous three years combined (10).

“The remainder of the season is a lot of doubleheaders,” Strickland said. ‘“We didn’t do that early in the season. If we did have doubleheaders set, they got rained out. For the rest of this season, we have nothing but doubleheaders. I told those guys, you have eight games left on the board. If we go in and play our game, we’ll be competitive and have a chance at winning. It’s going to take the whole team to accomplish that.

“You play two games on Monday, then play two games on Thursday. The guys that pitch on Monday are going to be pretty worn out by Thursday, so you have to have some guys step up, throw strikes and guys swing the bats. I’m excited to see what the rest of the season holds. We have a lot left on the table, but it does take a little bit of pressure off you when you take care of business today and you know that you’ll be in the postseason.”

Springwood is home on Monday for a doubleheader against Coosa Valley, which will serve as the team’s senior night.