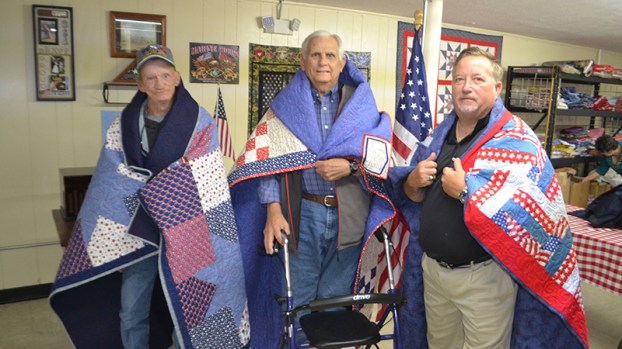 WEST POINT — Three U.S. Army veterans are the latest recipients of quilts presented by the Georgia-Alabama State Line chapter of the Quilts of Valor. The presentations took place at 11:30 a.m. Saturday at sewingmachine.com in downtown West Point. The men honored were Kenneth Carroll of Lanett, Phillip Boyd of Wedowee and David Dismukes of Opelika.

Carroll had a 20-year career in the Army, serving from July 1966 to September 1986. He was an aviation specialist and served one tour of duty in Vietnam and two in Germany. Carroll’s dad, the late L.G. Carroll, of Ashland, served with the U.S. Navy in World War II. He has a son that served in the Army National Guard in the Bosnian War in the 1990s and later on in the Iraq Wars.

Boyd is a native of Mableton, Georgia. He was stationed in Germany during his war service.

“I had papers to go to Vietnam two or three times,” he said, “but luckily they were canceled before I had to go.”

Dismukes was in the Army from 1985-2005 and served five tours of duty in combat zones. He served in Desert Storm, Afghanistan and in the Iraq War.

“I love my country,” he said. “It was an honor and a privilege to serve the American people for 20 years. My son is now serving in Korea, and I am proud of what he is doing. Thank you, ladies, for your support. It means a lot to all veterans. I will hold this quilt near and dear to my heart.”

The Georgia-Alabama State Line chapter meets on the first Saturday of every month at sewingmachine.com. There are usually six or seven women who like to sew at each meeting. “Anyone who is into sewing or quilting is welcome to join us,” said chapter spokesperson Sheila Simpson. “You can bring your own sewing machine, or we can set you up with one. We will accept donations of your time, fabric or money. An estimated $100 of fabric goes into each quilt we make. Much of the cost is coming out of our pockets. We want to keep this going. Any assistance we can get will help us.”

The Quilts of Valor is a national not-for-profit organization. It was founded by Catherine Roberts in 2003. At that time, her son Nat was deployed in Iraq. She worried constantly for his well-being and one night she had a dream.

“It was as vivid as real life,” she said according to the Quilts of Valor website. “I saw a young man sitting on the side of his bed in the middle of the night, hunched over. I could see his war demons clustered around, dragging him down into an emotional gutter. Then, as if viewing a movie, I saw him in the next scene wrapped in a quilt. His whole demeanor changed from one of despair to one of hope and well-being.”

The dream inspired Roberts to form a quilting group with the purpose of making quilts for active-duty military personnel and U.S. veterans. Their first quilt was given to a U.S. soldier recovering from his wounds at Walter Reed Hospital in Washington, D.C. It took several years for Roberts and her small group of quilters to present their first 100 quilts, but as word spread about what they were doing other chapters were formed. Eventually, it became a national organization mostly made up of dedicated women who want to thank those who have served our country.

“That’s a lot,” said Simpson, “but there’s so much more to do. We would like to present a Quilt of Valor to every soldier and veteran who served our country.”

Each Quilt of Valor has a three-part message:

It offers comfort for each recipient.

“Comfort quilts have been given to soldiers for many years,” Simpson said. “The quilt we are giving you today is not meant to be hung on a wall or put in a display case. It is meant to be used. We want you to wrap yourself in it. It’s our pleasure to honor you for your service. We thank you for your service to our country.  To those who served in Vietnam, we offer a belated welcome home. It wasn’t right the way many of you were treated when you returned home back then.”

In some cases in the late 1960s and early 1970s, some soldiers returning home were told not to wear their uniforms out in public to avoid being harassed by the growing anti-war crowd.

“We want you to use your quilt,” Simpson said. “If you wear it out, we will make you another one.”