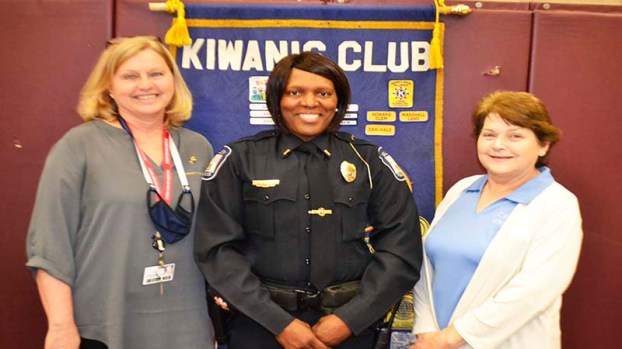 VALLEY — At Wednesday’s noon-hour meeting of the Kiwanis Club of Valley, Lt. Sandra Crim talked about why May is a favorite time of year for her. It’s high school graduation season, and she sees children she has followed since kindergarten receive a diploma they have worked really hard for.

“I always get emotional when I see them standing together for a group photo,” she said. “They are in their caps and gowns and ready for a big event in their life, and I realize that I know the stories of at least half of them,” she said. “In some cases, I thank God they have made it this far. I can remember having to get on some of them over the years. We always love them, pray for them and do what we can to keep them on the straight and narrow.”

Crim is one of four resource officers with the Chambers County School District. She’s with the Valley Police Department and works the schools in the Valley School District. She’s been with Valley for 23 years. In that time, she has walked the hallways of schools and the school parking lots many, many times. She’s found many hiding places where kids go when they cut class. She’s often the first to see a security camera that has been spray-painted or broken with rocks. It’s something that doesn’t happen that often but when it does, corrective action is necessary.

Another special time of the year for Crim comes next month when Valley Police Department hosts the Junior Police Academy. It did not take place last year because of COVID-19 but will resume this year in mid-June. It’s for kids in the five through 15 age group. Some older teens who came through the program usually come back to help out as volunteers.

“We thank the people of Chambers County for being very supportive of this program,” Crim said. “Bryan Yates does a similar program in LaFayette and does a great job with it.”

The kids in the Junior Police Academy have breakfast and lunch each day they are there in the week-long program. On the final day, they receive a certificate in a graduation program inside the Community Room at Valley Community Center. Lots of parents, grandparents and siblings attend.

There are usually fun activities throughout the week they will remember for a lifetime.

“When we last did it in 2019, we had two helicopters here,” Crim said. “They really enjoyed that. We have allowed some of our children to milk a cow. The younger they learn where their milk comes from the better. Some parents have told us they wished we could do it all summer. They go home well behaved, sleep well that night and can’t wait to get back to the next day’s session.”

“The one thing I love most about my job,” said Crim, “is that programs like the Junior Police Academy allow me to start building relationships with kids in kindergarten, and I can follow them all the way through school.”

In past years, participants in the Junior Police Academy have taken field trips to Bradshaw-Chambers County Library to take in events during the library’s Summer Reading Program.

“We want them to read 100 books in the Summer Reading Program,” she said. “We ask them to talk about what they have read. It will help keep them on grade level.”

Crim is also involved in a summer youth program for the Valley Housing Authority.

“It’s an all-day program,” she said. “We can do things like teaching them proper etiquette when they are eating in public. We teach them to always treat others with respect. The main thing is to be on time every day and to have a way back home at the end of the day.”

Crim said that discipline problems are very rare with the young police cadets. She recalled one instance where she was getting concerned when she couldn’t locate a youngster in the program. When she did, the young child told her that some of the older kids had told them to play a trick on the adults by hiding and not letting them know where they were. This was the case where the older kids, not the younger one, were the ones that got into trouble.

Crim has evolved in her police duties over the years. She started off as an officer, later was involved in the Drug Awareness Resistance Education, or DARE, program and eventually became a resource officer.

The job of a resource officer, she said, is to make sure schools are safe and secure.

“We take care of criminal mischief cases from time to time,” she said. “Kids sometimes don’t make good decisions. We help them try to make the right choices.”

Crim has also been involved in teaching what’s known as RAD, or rape aggression defense. “We usually take between 25 and 30 females at a time,” she said. “They have ranged in age from 12 to 80.”

Crim’s wide range of experience has caught the eye of officials in the governor’s office. She has been appointed to a task force that seeks to make school campuses safe and secure in a multi-county region. This has given her the opportunity to visit every public school across a wide swath across south Alabama.

“The goal is to see that every school is as safe and secure as it can be,” she said.

One detail is to make sure every school has at least one kind of drill every month.

“Kids need to know safe places they can go in the event of a fire or a tornado,” she said. “They need to practice exactly what to do in case something like that ever happens.”

Crim has met with safety coordinators and EMA officials in every county in her coverage area. “We do walk-throughs in all the schools,” she said. “We want to make sure the children are always in safe places. They should never be near windows if a storm is approaching.”

Crim has made many visits to daycare centers making sure the staff knows what to do in an emergency.