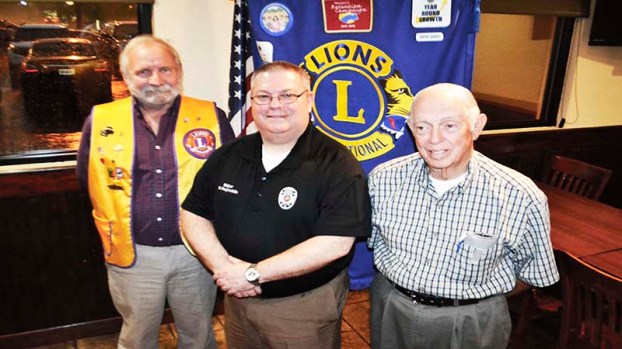 VALLEY — Mike Reynolds talked about his long career in law enforcement at Monday evening’s meeting of the Valley Lions Club. He’s been with the Valley Police Department since 1988 and has been the department’s assistant chief for the past 12 years.

“I grew up in the North, came South in the service and have been here ever since,” he said.

Reynolds was with the U.S. Army and stationed at Fort Benning before getting into law enforcement. At VPD, he’s held just about every position except being a school resource officer. He’s been a patrolman, patrol supervisor and a detective. He supervised that department before becoming Tommy Weldon’s assistant when he became chief in 2009.

Right now, the Valley Police Department is undergoing a transition. Weldon will be retiring as chief on Oct. 1 after a 36-year career in local law enforcement. There are also some new faces in the department. Four new officers have been hired and are currently undergoing 14 weeks of training at the police academy.

“We are getting back to having a normal staff, and I am glad for that,” he said. “I’m in charge of the hiring. Some of our applicants aren’t what they used to be, but we usually get down to some really good people. When we have openings, we advertise in the local paper and on Facebook. There are physical and written tests our applicants take. If we get 10 applicants, half of them won’t show up and only two or three will pass both the physical and written tests.”

VPD is also getting some new vehicles, three last year and three more new ones this year.

“I get out from behind my desk from time to time and get behind the wheel of a patrol car,” he said. “I like to know what our officers can do when they are out on the road. The new vehicles we are getting are much more sophisticated than they used to be. The officers now have handheld computers. In the old days, we had a clipboard and white out when we had to correct mistakes. Policing is a lot more different these days.”

With all the changes, there are some basics that remain the same over the years.

“It’s important to have good relationships with the community,” he said. “We have worked hard to maintain that over the years, but we have to stay on our toes. I am always telling our young officers that just one mistake can cost us all the goodwill we have built up over the years.”

Reynolds said that a police officer is involved every day in real life. It’s not like it is on TV and in the movies, and it’s not always like the simulations a trainee goes through in the academy. There are times, he said, when an officer gets drawn into a fight.

“They won’t show an officer getting beat up,” he said of the national media, “but they will show what a policeman does in response.”

Reynolds said the local media is very good to work with.

“We have good relationships with them, and they are very good at getting stories out,” he said.

Reynolds said that car cameras and body cameras have proven to be very good tools for VPD. “We want their cameras on all the time,” he said. “More often than not, having a recording of what really happened will help the officers. There are times when they are falsely accused of something. Having video of what actually happened helps them in those situations.”

“We have lost a lot of cars that way,” he said. “The new cars don’t hold a candle to the old Crown Vics. Those cars could take anything.”

An officer faces tough situations out in the field and has to put up with a lot. If he or she gives in to anger and flips off someone, said Reynolds, it’s harassment and there’s a public expectation that they should be disciplined.

“If someone does it to them, it’s free speech,” he said. “We are trying to teach our young officers to be as tolerant and respectful as they can be. We want them to be well aware that there are people out there who will try to bait them to do something. They have someone recording it on their phone, and if they respond in a way that looks bad that part will be on YouTube, but you won’t see what led up to that.”

Reynolds said that Valley is fortunate to have some really good officers, but it’s hard to keep them. Experienced officers are always in demand. The pay is much better in larger cities.

“I would like to see us get our pay up to the level of places like Auburn, Opelika and Lee County,” he said.

Mike and his wife, Debbie, are proud of their two children, both of whom graduated as valedictorians at Springwood School and have moved on to rewarding careers. Their son is a graduate of the U.S. Air Force Academy in Colorado Springs, and their daughter earned a nursing degree from Emory University in Atlanta.