Lightning likely cause of historic blaze at First United… 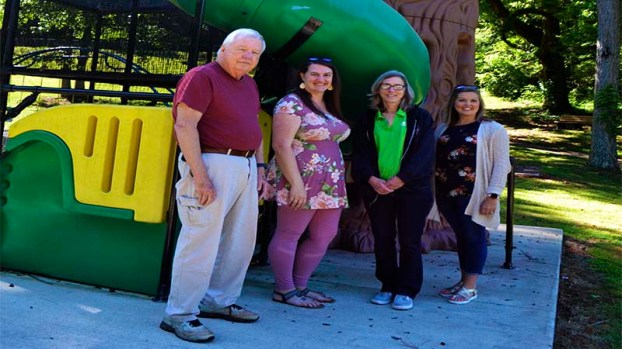 VALLEY — The Fairfax Junior Variety Club, the Junior League of the Chattahoochee Valley and the City of Valley are teaming up in a cooperative effort to make Valley City Park a destination for family outings. The city has put in some concrete pads for new playground equipment and has built new sidewalks in the park. The local chapter of the Junior League has 501(c)3 status and has applied for numerous grants related to the upgrade of City Park. Some of the requests have been approved, and some new equipment has been purchased. A bright yellow Volta spinner is proving very popular with children. It’s plenty big for several kids to be on it at once, and it gets going pretty fast when an adult pushes it for them. The new model is considered  much safer than previous spinners that were popular on playgrounds at elementary schools.

There’s also a very popular treehouse-type attraction kids love to climb in. It used to be in the playground area at McDonald’s. When a new one went in, Mayor Leonard Riley persuaded them to move the old one, which is still in good condition, to City Park.

“The new spinner is a great addition to the park,” said Junior League President Amy Nolen. “My two daughters, Georgia Lou, who’s 11, and Sadie Beth, who’s eight, love to come here. We had Sadie Beth’s birthday party in the park last weekend, and everyone loved it. We even had an ice cream truck come to it.”

New equipment that will be in the park in the near future includes a see saw, a climbing feature and a rocker that sits on big springs and moves back and forth. Plans are to have a pavilion over one of the picnicking areas.

Junior Variety Club President Kristin Nelson said the park improvement project has been underway for the past two years.

“We think it’s a beautiful location right across from city hall,” she said. “It can be a wonderful place for families to come and play. Families with young children shouldn’t have to drive out of town to Opelika or Auburn to picnic and have recreation that can be had right here in Valley.”

She added that the city had done a good job with putting in the new sidewalks, concrete pads, picnic tables, new swing sets and permanent trash cans.

“There’s also some mulch in place to keep the play areas safer,” she said.

Momentum was building in 2019 on the park improvements but got sidelined last year with the Covid-19 pandemic.

“We are back working on it now, and we appreciate the Junior League stepping forward to help us,” Nelson said. “With them having a 501(c)3 non-profit designation they can apply for grants.”

Nolen said the Junior League had applied for ten grants and had thus far been approved for two of them. That enabled the purchase of the Volta spinner.

“We have been awarded $10,000 from the Charter Foundation,” Nolen said. “We are most appreciative of that. We are looking for some rockers for the kids.”

Children especially like the ones that look like police cars, fire trucks and ambulances – the kinds of public safety vehicles that are frequently seen in the community.

“We are now taking a poll on our Junior League Facebook page to get an idea of what people want,” Nolen said. “We also sent out 225 letters to local businesses seeking sponsorship for the park. A number of them have responded, and we appreciate that.”

Some metal signs will be going up on existing fencing listing the sponsors. Illustrations of what the signs will look like are on the Junior Variety Club’s Facebook page.

“We are so pleased to have an active partnership with the Junior League and the city in the upgrade of Valley City Park,” Nelson said. “We want people to come here and use it. It’s a great place to picnic and play. We want to keep it that way.”

“It’s a good park,” said Valley Parks & Recreation Director Laurie Blount. “It was looking run down for a time, but now it’s looking a lot better. Valley may be a small town, but we look after each other and take care of each other.”

Mayor Leonard Riley thanked the Junior Variety Club and the Junior League for the initiative they have shown on the project.

“We appreciate the help we have gotten from them,” he said. “It’s good to have these organizations coming together and helping move this along. We are also grateful for the contribution made to the park by the Charter Foundation.”

The park’s baseball field has been maintained for some time now by West End Baptist Church, which has sponsored a character league.