LaFayette football aims to ‘protect the brand’ heading into… 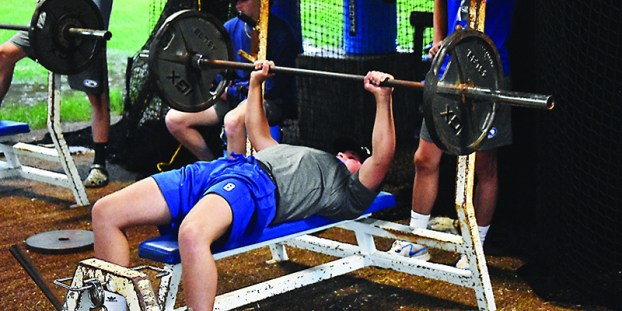 The last time the Chambers Academy football team was together as a group, the Rebels were lifting the state championship trophy in Montgomery. Now a little more than eight months later, the Rebels are gearing up for a chance to repeat as state champions.

The process started on Monday, as Chambers began its summer workouts.

“They [the players] were very excited to be back yesterday,” head coach Jason Allen said. “We had roughly 65 or 70 kids here. There’s just a lot of excitement. Our kids have always been willing to work and show up. I think that’s probably why we’ve had some success the past couple of years.”

For Allen, championship teams are made during the summer training sessions. While it is a time for improving oneself physically and mentally, it is also a time for evaluation. Allen and his coaches, who are floating between workout groups, are watching how players react when they are tired and how much effort they are putting into each lift.

“This is a very important time to me,” Allen said. “I feel like football teams are made in summer workouts. You can tell a lot about your team, how they work, their character, their accountability and how they show up.”

The past few seasons, Chambers has had a lot of players that have experienced playing in big games and played in a lot of games, helping them become leaders once they are seniors. The Chambers 2022 senior class is one of, if not the biggest senior class in school history.

The Rebels bring back almost all of their starters from a year ago, which should help the leadership of the team moving forward.

“We have a big senior class coming back, so I hope they can be the type of leaders that I think they are,” Allen said. “They saw it done right last year. The senior class wasn’t half the size they were but they had some great leaders in that class. Our seniors are going to work,  and when the other guys see them working hard, to me, that’s the most effective leadership you can provide.”

Along with the players that are getting prepared for the high school season, Chambers has allowed some of the peewee players to participate in some of the summer workouts. On Tuesday, an eight-year-old and 10-year-old participated in every station of the Rebels circuit workout.

“It’s crazy. I’ve had some younger peewee guys come out here and ask to be a part of [the workouts],” Allen said. “It’s not mandatory for them, but we let them jump in. We’ll have eight, 10 or 12 of those guys. What’s neat is to watch the older guys include them. They’ll say this or that to them as words of encouragement, and that goes miles for those little kids. That keeps our program healthy in my opinion, because those guys before you know it, they’ll be playing.”