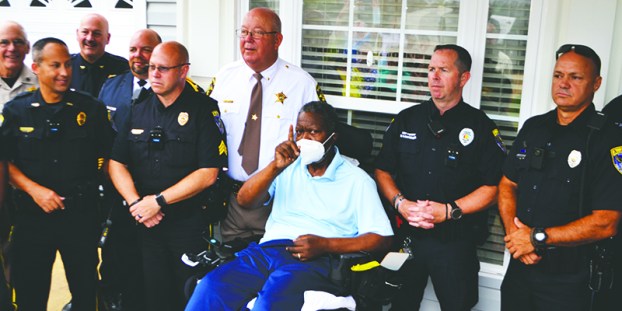 OPELIKA — There was a good turnout on the part of law enforcement officers from Lee and Chambers counties Friday morning on Autrey Street in Opelika. They were showing their support for Officer Michael Roberson and wife Jacqueline as they dealt with a major health setback.

In 2019, Roberson had a heart attack that kept him out of work for an extended period. On his first day back at work, a series of strokes left him unable to walk or speak. He communicates with people by writing with an erasable marker on a whiteboard. His physical condition has created new problems for him and his wife. He hasn’t had a shower in six months, and his wife has avoided sleeping in their upstairs bedroom. To be near her husband, she sleeps downstairs in a lounge chair that wasn’t made for long periods of rest.

Roberson has always been very popular with his fellow officers with the Auburn Police Department. They like to call him Officer Robo. He’s also well liked by the students at Auburn Junior High, where he was the school resource officer for 11 years. They liked to call him Moon Pie.

Friends in the Opelika-Auburn area have been looking for ways to help the Robersons. At no cost to them, Auburn designer Joy Brown has come up with an architectural plan to add a new bedroom and bathroom with a roll-in shower on the back side of the Roberson home. It will cost an estimated $40,000 to get it done, and the Chattahoochee Fuller Center Project (CFCP) will be pulling it together. A local contractor has volunteered to oversee the project and subcontractors will volunteer to complete different phases of the work.

CFCP Executive Director Kim Roberts and Assistant Director Robin Pierre are well thought of in Lee County for the manner they directed a home building project in Beauregard following a devastating tornado in 2019. Lee County residents reached out to them again two weeks ago to see if they could help the Robersons.

“When I met Officer Robo two weeks ago, I told him I didn’t know how we would get them a new bedroom and a bathroom with a roll-in shower but that we would,” Roberts told a sizable crowd gathered for a kickoff event. “It’s time we put this family back together again. We need $40,000 to get it done.”

The first $1,000 of that was donated at Friday’s event. Speaking on behalf of Chambers County peace officers, Valley Police Chief Tommy Weldon donated a check from donations made by officers and paramedics.

“That makes us one check closer to that roll-in shower,” Roberts said.

Roberts said it was good for someone like Chief Allen to have your back.

“We grew up on the same street in Lanett, and he has always looked out for me,” she said. “He was a paramedic before he ever thought about being one.”

Fuller was confident east Alabama residents would come up with the $40,000 that’s needed.

“The people of our area have been very generous in helping people for a long time,” he said.

Roberson was seated in a motorized wheelchair underneath the front porch of their home as the CFCP-hosted event took place. He frequently brushed back tears of gratitude, especially when fellow officers he’d worked with for years spoke about how much he meant to them. They worked alongside him for many of the 28 years he was in law enforcement.

Lee County Sheriff Jay Jones said it was very gratifying for him just to be a part of something to help Roberson. Helping others, he said, gets to the heart of what law enforcement is all about.

“We are here for Mike today,” he said. “He and his family will get what they need. It is a privilege to be a small part of what is going on today.”

“It’s an honor to be here today and in the presence of so many law enforcement officers,” Tramell said. “I have been so touched by Michael and what he’d been going through. I understand his wife is a member of the Alpha Kappa Alpha Sorority. One of our council members in West Point, Sandra Thornton, and April Ross, who is here today for Bee TV, are members of the same sorority. I issue a challenge for the Alpha Kappa Alpha members to step forward and help this family.”

Curt Johnson said the project needs to be done in the very near future.

“We need to do it quickly so the Robersons can get back to a normal life,” he said.

The Robersons’ pastor, Markeita Jane Smith, said she was overwhelmed by the kind of support the Robersons were receiving.

“I could not be more excited about what I see going on,” she said. “I am so proud to be here and share in the moment with you.”