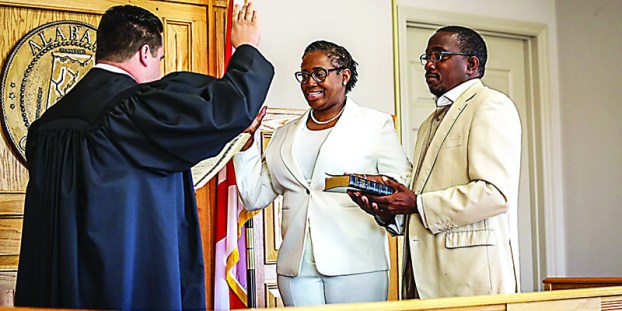 “Just actually being appointed chief clerk was great,” Foreman said. “I was excited about that. Then, it was brought to my attention that I probably would be the first black [chief clerk], but they wanted to do research to make sure. Finding out that I was and the youngest was just icing on the cake. It just made it even more memorable.”

Originally, Foreman never thought about receiving a promotion, as most promotions in the probate office normally come from retirement or someone leaving to take another job. Foreman said the latter rarely happens as people love to work at the probate office.

“When I did come in, Mrs. Nannette [Brooks], she did express a desire to retire in three years. She did it a little bit earlier, so I was honored that Judge [Paul] Story asked me if I would take the chief clerk position,” Foreman said. “It was very, very special to me.”

Foreman started working at the Chambers County Probate Office in 2019 as a driver’s license clerk. Part of her duties included answering and transferring calls around the office.

She received one call that significantly changed her job in regards to an estate. As she started to transfer the call to Brooks, she asked if she could sit in on the call to learn how to handle the situation in the future.

“At that point in time, I sat down with her and Brooks, and we worked out that she would be our driver’s license clerk and administrative assistant,” Probate Judge Paul Story said. “That way she could be exposed more to the probate court filings and the day-to-day of the office. The rest is history. At that time, we were talking about Mrs. Brooks retiring not long after with her ministry and her wanting to spend more time with her spouse. Chasity was already so infused in the office. She does great with the other workers. She’s just a fantastic individual, so it was a very easy choice at that time.”

After adding the role of administrative assistant, Foreman started working closely with Brooks and Story, learning the ins and outs of the probate office.

“Working with Mrs. Nannette and Judge [Story] has been great. Since day one, they’ve been very helpful,” Foreman said. “Learning drivers’ licenses wasn’t that hard, however, I moved up to an administrative role to assist Mrs. Nannette because she does have a lot of things that she does. Once she began to show me things and train me, it was interesting. I didn’t know the probate did so much. She’s been patient, kind and supportive. Judge Story has been there helping me along the way. I know going forward that I have to continue to call on both of them. She’s already told me that she would make herself available to me because it is a lot serving Chambers County and the citizens to the best that we can do.”

When Brooks officially announced that she was ready to retire, the choice was easy for Story because of the work ethic that Foreman had displayed.

“You have to have somebody that is truly dedicated to the position because they’re my right arm. They’re the person who is able to assist in every aspect of the probate court,” Story said. “It has to be someone that has a strong work ethic, open to learning and dedicated to their position.”