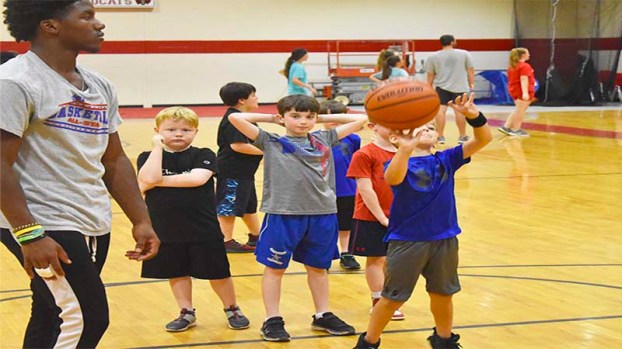 For three hours on Thursday, more than 30 kids, ages ranging from first grade all the way up to rising freshmen, took part in the inaugural Springwood Basketball Joe Ciampi Basketball Academy.

“Today was great. It’s great to get back in the gym,” Sampson said. “It’s great to get the young kids involved because we’ve never done a camp like this, due to COVID and with us just being new to the school. We have an excitement for basketball. You can see it. We had more than 30 kids here. It’s just great.”

Assisting the three coaches were members of the 2020-21 Springwood varsity basketball teams. The current Springwood players were broken up into groups, helping coach smaller groups of campers.

“Our players are working it and taking pride in the program and helping these kids that look up to them, Sampson said. “It’s great.”

In the first hour, Ciampi ran various drills with the kids, teaching them the fundamentals of basketball. For the next hour, the campers worked in different stations, refining the skills they worked on with Ciampi. For the final hour, the campers got to have more fun, participating in a free-throw contest, which will be decided later in the camp and pick-up 4-on-4 games.

“Fundamentals aren’t taught enough in my opinion,” Sampson said. “To really dial down and teach the basics will really help them moving up. We have some JV kids at camp that are really going to be special. We’re very excited.”

For Sampson, this is her first time doing a camp for a high school, since she hasn’t coached high school basketball before Springwood. Though this is the first high school camp she has done, Sampson has worked with her father doing different camps in Auburn alongside working with him during his time with Auburn Raptors, an AAU program that Sampson currently runs.

“Personally, I love having my dad involved. That’s special for me to work with him again, so I’m very thankful that he took the time and takes the time to give back. That means something to him. He has a lot to give back,” Sampson said. “We’re excited about days two and three. We’re going to build on what we did today.”