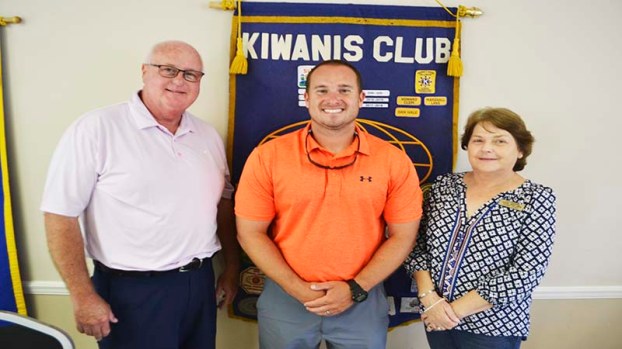 VALLEY — The start of the 2021 local high school football season is less than a month away now. Adam Hunter, the head coach and athletic director at Valley High, talked about this year’s Ram team at Wednesday’s noon hour meeting of the Kiwanis Club of Valley.

The Rams play their first game on Friday, Aug. 20 at Beauregard. The next week they will be home versus Lanett.

Valley will be in 6A for at least one more year, but the school could drop back down to 5A the following year. Hunter would welcome being in a lower classification.

“There’s a big difference between 5A and 6A,” he said. “Every 6A team we played last year had at least one Division I prospect. It’s not like that in the lower classifications.”

Last year’s team had 15 seniors, 13 of whom started on offense or defense. There’s only eight seniors this year, and the junior class is low in numbers, too. There will definitely be a youth movement this year at Valley. Both the sophomore and freshman classes appear to be loaded. If the Rams drop down to 5A next year, the experience gained could allow the Rams to be really competitive.

Valley does have some experienced guys coming back on the offensive and defensive lines.

“Football games are won or lost in the trenches,” Hunter said. “We have been working hard in the weight room trying to get more physical. We don’t have a Taj Mahal weight room like they have at Opelika High, but it does serve our needs. Our kids have bought into what we are trying to do.”

Hunter is entering his second year as Valley’s head coach. He’s been at the school in some capacity for 14 years and has loved it.

“I have met some wonderful people in Valley,” he said. “They have helped me get where I am, and I will never forget that.”

The coach got emotional when he talked about seeing what some of his players go through.

“I have some kids who put in 100 hours to earn a two-week paycheck,” he said. “They have taught me to be a better man. Some of them work past midnight (at local restaurants) and are at football practice at 7 a.m. the next day. It breaks your heart to see what some of our kids go through.”

With the kind of players Hunter has he doesn’t rebuild, he reloads.

“We will be competitive this year,” he said. “We need to be more physical, but I believe we are getting there. They are putting in the work, and that’s all you can ask for.”

When he puts on his athletic director’s cap, Hunter likes to talk about the other sports teams at Valley High. Those teams include cross country, volleyball, boys and girls basketball, swimming and baseball.

There’s a great deal of interest in volleyball.

“Coach Messer had 50 girls out in the spring,” Hunter said. “We added swimming last year. It’s a way of reaching some kids who may not participate in our other sports. The team did pretty well last year. Our softball team made the playoffs last year, and we are looking for another good season this year.”

Matt Hicks is the new baseball coach after coming over from Prattville.

“There’s some great tradition at Valley High, especially in football,” Hunter said. “We want to get back to that. We have been working out since the first week in June. Fall camp starts next week. We are ready to get going.”

Hunter was asked by a member of the club if there are any restrictions due to a resurgence of Covid-19.

“Not right now,” he said. “We wash our uniforms every day, and we spray down the locker room every day. Our kids know what they need to do. They don’t have to be told. They do it on their own.”

Players will be in helmets for the first two days of fall camp. They will then put on shells for a couple of days and on Friday will put on full pads.

“We will go at it for two hours,” Hunter said. “We will have an up-tempo practice for that long.”

It’s no fun for a borderline 5A school to be stuck in 6A.

“We’ll do what we can to make the best of where we are,” Hunter said. “We hope to get back down to 5A next year.”

The Rams will once again have a 3-4 defensive alignment with three down linemen and four linebackers. Some of the team’s better athletes will be the outside linebackers. They will be stunting or blitzing on virtually every play, trying to put as much pressure as possible on opposing offenses.

“Marshon Harper does a great job in working with our guys,” Hunter said.

Success on defense will be a matter of everyone doing their assignments.

“They just need to stay in their gaps and not get washed out,” Hunter said.

The year 2020 was a difficult year for everyone with Covid being such a factor. Ticket sales at Ram Stadium were limited because of it.

“We had restrictions on how many people we could let in,” Hunter said. “We don’t have that right now. Hopefully, we are getting back to normal.”

“We don’t need to be hitting the local businesses over and over again,” Hunter said. “We are fine-tuning it right now. We’re looking at having gold, silver and bronze-level sponsorships.”

Hunter said that booster support remains important, even though it’s not at the same level it once was.

“When they get off work, they want to go home. They’re also working rotating shifts.”

Covid is another factor.

“Things may never again be what they once were,” Hunter said. “The world has changed. There’s more work going on at home and more being at home than there once was.”