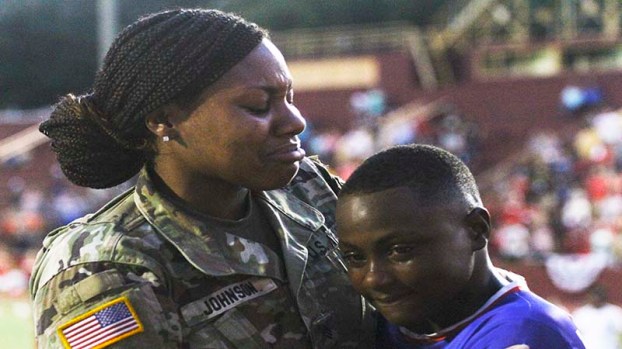 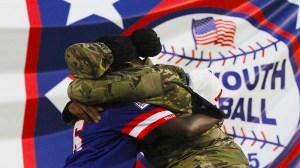 Dixie Youth baseball fans gathered in South Mississippi expected to sweat, but they got some tears, too.

Before the teams were introduced, U.S. Army Sgt. Ma’Tika Johnson of Valley, surprised her family by walking down the top of the stadium. After moving her mother and other family members in attendance to tears, Johnson saved the biggest surprise for last – surprising her younger brother Zephi Madden, 11, on stage during his team’s introduction.

“I didn’t tell anyone I was coming – not even my momma,” Johnson said. “I followed his team on Facebook from the updates my momma would post. When I found out I could take leave, I knew I had to come.”

That decision led to a heartwarming moment. While hundreds of players walked across the stage as their names were called, Johnson hid behind the stage, heavy in emotion and anticipation. As Madden crossed the stage, Johnson made her way up the steps. The siblings made eye contact and emotion overcame them.

A lengthy embrace led to a thunderous applause in the stadium. It is a moment that neither will ever

“I was so happy to see my sister,” Madden said. “I saw something weird happening right before I got

on stage, but I didn’t know it had anything to do with me. When I saw her, I was surprised. It had

been so long since I saw her. I missed my sister a lot.”

During her deployment at the Southwest border of South Korea, Johnson was injured on a mission. After following Valley’s Facebook page, she knew that it would be the perfect time for a break in the action. For Johnson, it was a long process to get to Laurel, but a moment that she will never forget.

“When his team won state, they announced they would be coming to Laurel,” Johnson said. “I noticed it

was around the time that I would be returning. I talked to a couple of my superiors and explained I wanted to go surprise my brother for the World Series. They all agreed that I should take leave and go.”

After getting clearance from the Army, Johnson departed from her station at the border and secretly made her way to Laurel.

family. It was a plan that kept her family in the dark, but it created a moment that neither Johnson nor Madden will ever forget.

“It was surreal,” Johnson said. “It was something that I couldn’t even imagine, and I was so nervous. As I was hiding, I didn’t know how he would react. When the moment finally happened, I was just speechless. I was so happy to see him.”

An eight-year Army veteran, Johnson endures hiatuses from her family often, including an eight-month period since the last time she saw them. But being in Laurel with her family is something that she is going

“When you’re in the Army, you have to maximize your time at home,” Johnson said. “While I am here, I am going to cherish being back with my family. I can’t thank everyone enough for all the support and making this happen. It is something that I will never forget.”