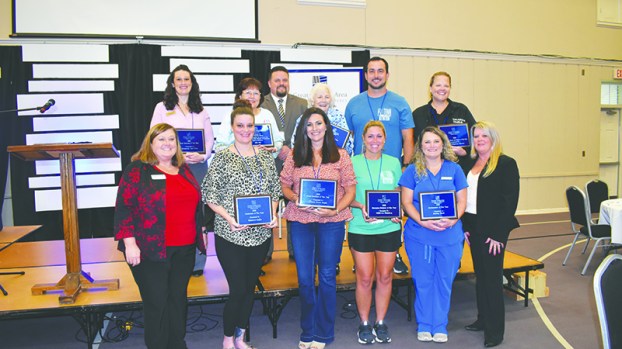 At its annual membership meeting on Thursday, the Greater Valley Area Chamber of Commerce shined a spotlight on many people and businesses for their outstanding work and support of the chamber.

GVACC Executive Director Carrie Royster first introduced Tarin Parrish, who has been with the chamber as an administrative assistant since February.

Several members of the ambassador committee were recognized.

“Without our ambassadors, many of these events, which the Chamber hosts, would not be possible,” Royster said.

“On behalf of the board of directors and chamber staff, we would like to say thank you for your dedication in serving this year as an ambassador,” Royster said.

Every year, the chamber recognizes an ambassador who dedicated a lot of time and service to chamber events and activities, Royster said. This year’s Ambassador of the Year award went to Beck.

“The chamber created awards in seven categories, and they are voted on by you, our chamber members,” Royster said. “Today, we will recognize the winners of these awards, awards given by chamber members to chamber members based on the impact they made this year.”

An award in memory of the late Charles Story in recognition of his dedication and service to the GVACC Board of Directors from 2019 to 2021 was presented to Beverly Story and Paul Story.

“As we close up this year, we want to take the time to remember and honor one of our own,” Royster said. “Mr. Charles Story was a great asset to our organization over the last few years.”

Royster said she was amazed at what the chamber had accomplished within the past year.

“The chamber has acquired 32 members, hosted a list of events including Holiday Fest on the Square, the shop local campaign, and two first responder appreciation lunches,” she said. “2021 was the second year the chamber awarded a scholarship to a junior ambassador. This year’s recipient was Kamdyn Oliver. Kamdyn is a graduate of Chambers Academy and now a student at Auburn University.”

The chamber has 40 junior ambassadors for this year’s program, which started this month, according to Royster. She said that in June, the chamber started a new tourism committee, which produced t-shirts with 30 local businesses, tourist attractions, and other locations printed on them. These shirts can be found throughout the county at local merchants.

The committee also started an antique store program in August that will run until next August. There are six participating antique stores. When a participant has purchased from four of these locations, they become eligible to win a gift card, Royster said.

Platinum sponsors for the event were Knauf Insulation and Kia Georgia, Inc.

Catering was provided by JB’s Butthouse.